Like most museums across the country, World Museum suspended its volunteer programmes shortly before the first national lockdown in March 2020. This was meant to be a short-term measure but with curators continuing to work hybridly our volunteers haven’t yet returned. Organisations like Volunteer Scotland have advised volunteers to consider if and how they can work remotely.

While some museums had existing remote volunteering activities (see great examples here and here), which saw increased participation, World Museum’s vertebrate zoology collection didn’t. An additional challenge for us has been that remote access to our collections database is limited to staff with a VDI. With the pandemic still with us for some time to come (Chris Whitty has said it will be 5 years) we have started exploring ways to engage both new and long-serving volunteers with the collection online.

During lockdown, Auckland Museum published a Wikimedia strategy citing the provocative 2018 talk by Adam Moriarty which championed the importance of collection information featuring, not solely on museum’s own webpages, but in places like GBIF and Wikipedia. This reinforced our view that we need to improve the collections’ presence in Wikipedia. Wikipedia articles are created by volunteers and can be edited by anyone with a standard web browser, potentially providing a valuable activity for remote volunteering.

END_OF_DOCUMENT_TOKEN_TO_BE_REPLACED

From World Museum’s founding collection of study skins and taxidermy mounts bequeathed by the 13th Earl of Derby to the spirit-preserved amphibians collected by curator Malcolm Largen in the 1980s, World Museum’s Vertebrate Zoology collection has continued to expand and reflect the state-of-the-art in specimen preparation and storage.

As ethics around the sacrifice of animals for science have modernised, ‘traditional’ specimen types are no longer being prepared at the same rates, and growth of the collection has slowed abruptly. At the same time usage of the collection has diversified, including increases in requests for destructive sampling. In particular, the removal of small tissue samples, usually bird toe pad scrapes, is regularly requested for use in DNA extraction which produces a ‘pure’ DNA extract that can be used in a number of genomic investigations.

END_OF_DOCUMENT_TOKEN_TO_BE_REPLACED

In 2020 the Vertebrate Zoology collection at World Museum took a step towards ‘FAIR’ data sharing and began adding datasets of specimen records to the Global Biodiversity Information Facility (GBIF). There is always a trade-off between releasing datasets as soon as possible and ensuring they contain the most precise and reliable data possible. We’ve taken the view that through releasing these datasets, and encouraging their use, a positive feedback loop will incrementally improve data quality. That said, due to restrictions on other activities, one side effect of the Covid pandemic has been a little more time for in-house provenance research.

One collection I’ve focussed on during this time is that of prolific collecting duo, Herbert Christopher Robinson and Cecil Boden Kloss, which came to World Museum from the Federated Malay States Museums (FMSM) in 1914. Robinson, a former assistant at the Liverpool Museums, directed the FMSM from 1908 until 1926; Boden Kloss was the colleague ‘to whom he was much attached’. It seems that the FMSM specimens arrived in Liverpool without any additional documentation, so the collection locality information in our database (at National Museums Liverpool we use Mimsy XG) must have originally been transcribed from specimen labels with ‘place collected’ presumed to be Malaysia. END_OF_DOCUMENT_TOKEN_TO_BE_REPLACED

Welcome to the December edition of NatSCA Digital Digest.

This month’s Digest dispenses with the usual format and focuses on all things Christmas. Apologies to all those Scrooges out there, but all things considered, this year needs as much sparkle and fairy lights as we can throw at it people!

There are some super virtual advent calendars going on. I am off course recommending my very own institutions @CardiffCurator account. This year our annual #MuseumAdvent calendar meets #NatureOnYourDoorstep. We launched our nature #WinterBingo challenge on the 1st December. Find all 24 things before Christmas, tag them in and they’ll retweet your finds.

Then there is the wonderful Leeds Discovery Centre Video Advent Calendar. Every day, open a door to see what object their curators and staff have found in the Store. Also an excellent opportunity for a virtual nose around their stores.

And this year, Manchester Museum are bringing you a #Caring Christmas advent calendar. Each day their gift to you is a little story of wonder, celebrating how we care for our world and each other.

END_OF_DOCUMENT_TOKEN_TO_BE_REPLACED

Homhil proved a “successful and delightful sojourn, adding largely to both the flora and fauna [collected]”. The camp, surrounded by the iconic Dragon’s Blood Trees (see them yourself here), had an ideal climate, 26°C during the day, 18°C at night. 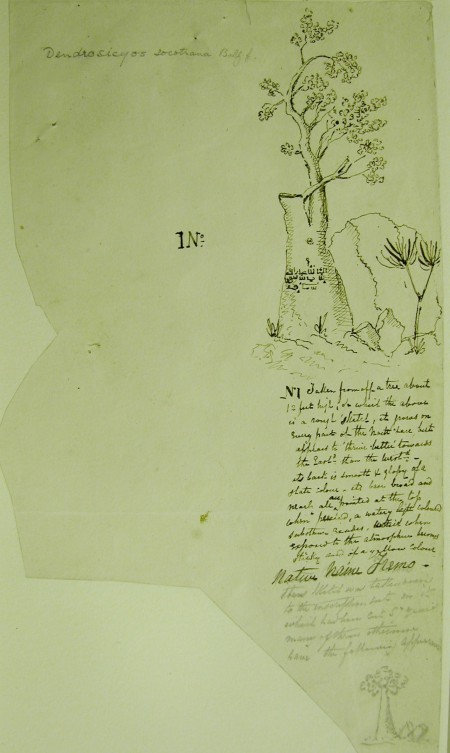 Sketch of the cucumber tree of Socotra by J. R. Wellsted, another unusual endemic tree, made during an earlier expedition to Socotra. The sketch is part of the Royle collection at LIV herbarium, World Museum. © National Museums Liverpool (World Museum).

Ten days later, after difficulties agreeing the onward route, the party retraced their steps to the Hadibu Plain. Turning southwards they pitched tents at Elhe and spent two days preparing fresh camels. On the second day, Forbes forgot to put one of his gaiters on and suffered a severe sunburn on his leg (having my own prominent sunburn scar, this is another field experience I can empathise with). While back on the plain, Ogilvie-Grant collected the endemic – Socotra Grosbeak, Socotra Starling, and Socotra Warbler – amongst other animals.

The party resumed their trek into the mountains, reaching an elevation with stunning sea views. They remained at Adho Dimellus (also spelt Adhoh di-Melhoh), the “roof of Sokotra”, until February 17th. Fieldwork often fuels friendships and an evening was spent entertaining an Austrian expedition party Forbes had met earlier in Aden. 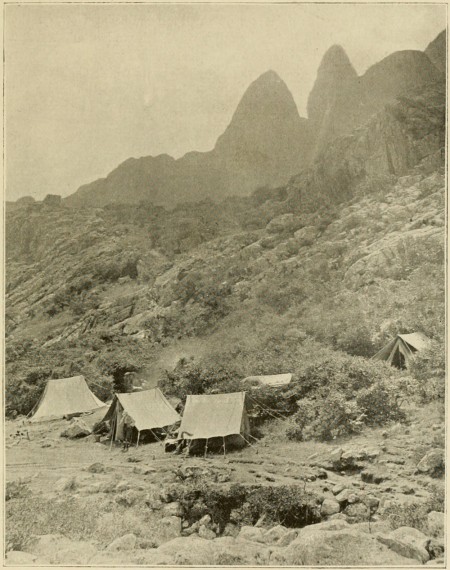 Photograph of the camp at Adho Dimellus (H. O. Forbes from The Natural History of Sokotra and Abd-el-Kuri). Public Domain.