The Museum of Life Sciences at King’s College London contains teaching and research material from King’s College London (KCL) and elsewhere. The collections include Botany, Zoology and Pharmacy specimens, including microscope slides, from around the world and a small, unique exhibition of glass sculptures recently created to commemorate the role of KCL in the discovery of the structure of DNA.

Paper and electronic (Access) databases were first created in 2003 and contained data for the then KCL Zoology and Botany Collections. In the last few years, volunteers have been recording specimens in paper (form-based) or electronic (Excel) formats and we have all been learning ‘on the job’. Inevitably specimens have been catalogued in different ways to record various kinds of information and many specimens remain uncatalogued. Some groups of specimens from a single collector/preparer or from a single source have been catalogued together as eg ‘The Daws Collection’, The Challenger Collection’.  The accumulating data were becoming unwieldy as there are now more than 8000 records. END_OF_DOCUMENT_TOKEN_TO_BE_REPLACED

In 2016 the Herbert held its first in-house natural history exhibition since a major redevelopment was completed in 2008. The exhibition, Nature Notes, explored the seasonal changes in local wildlife by displaying taxidermy, nests, insects, botany and fungi, botanical watercolours, oil paintings and contemporary artworks. It encouraged visitors to look at the natural world around them and the artworks aimed to inspire visitors to respond to nature in a creative way.

Nature Notes was designed to be enjoyed by all and accessibility was a key consideration in developing the interpretation and interactives. Additions to the exhibition included Makaton on the text panels and interactive tables; and the provision of accessibility aids such as torches, magnifying sheets and ear defenders. We considered contradictory needs such specific learning difficulties and visual impairments by producing lower contrast labels and providing high contrast large print text to take round the space.

Gallery view of Nature Notes. The seasonal display runs around the wall, with interactives and handling specimens in the centre.

The most popular part of the exhibition was the multi-sensory interactive tables with things to touch, smell and listen to. These were created by using low cost tables with adjustable legs with a vinyl graphic applied so they tied in with the exhibition’s design. Five pieces of taxidermy were commissioned – one of each season, plus a spare mouse. We worked with a local group of disabled and non-disabled teenagers to help us choose the right smells for each table – only the brave dared to smell the otter dung! As each offered the same experience of touch, smell and sound this meant queues did not form around one table, allowing for a better visitor experience. END_OF_DOCUMENT_TOKEN_TO_BE_REPLACED

The Bill Pettit Memorial Award was set up a few years ago by NatSCA to support projects including the conservation, access, and use of natural science collections. One of the recent projects we have been able to help with was the curation of some amazing specimens from the voyage of the Discovery. Hear more about the project from Tammy below.

In early 2013 we set about organising the task to begin with the curation of the largest, most recent and least organised of the three collections – that of the ECOMAR collection. The start of the ECOMAR project coincided with commissioning of the new UK Royal Research Ship James Cook officially named by the Princess Royal on 6 February 2007. The first ECOMAR cruise departed from Southampton on 13 July 2007. The ECOMAR project was designed to investigate the Charlie Gibbs Fracture Zone area which lies approximately mid-way between Iceland and the Azores. Four super stations were defined (two north of the Charlie Gibbs Fracture Zone and two to the south), all had the same bottom depth (2500m) and were revisited during voyages by the R.R.S. James Cook and the R.R.S. Discovery during the years 2007–2010 to replicate sampling, time-series investigations and flux studies.

The Discovery Collections have no full-time curatorial post and we rely on the goodwill and interest of students and other volunteers (including scientific visitors and work experience volunteers) to help with cataloguing, labelling, respiriting, and general curatorial jobs. The samples, though incredibly valuable should be considered at risk. I look after the collections in as much that I manage the visitors to the collections, host students, and manage public enquiries, visits and displays of the specimens. I am also a taxonomist employed to conduct research, describing new species and studying the ecology of the deep-sea benthic fauna. I was employed for four years to work on the ECOMAR program to describe the ecology of the scavenging fauna of the area. I therefore had a particular interest in the curation of this collection.

We employed Amanda Serpell-Stevens, to work on this project, but we had funds for only 8 weeks of her time. Thus the project was reduced from cataloguing the three large collections to just one. When Amanda’s contract ended there was still much reshelving and reordering of the material to be carried out which was carried out on an ad hoc basis by myself, a retired member of staff, Mike Thurston, and Amanda who returned on a voluntary basis to continue work on the project. 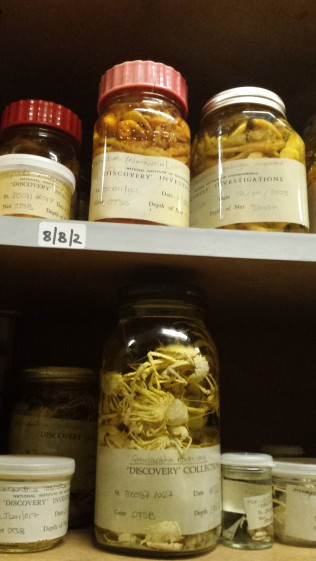 The project began by working shelf by shelf to curate and to catalogue (in paper record) what was held including location and size of each jar, and to change containers for those specimens that were in plastic containers or inappropriate sized jars. The preservative was also replaced in most of the jars and a new label produced for each specimen, as many were poorly labelled. This curation and cataloguing process took the majority of the 8 weeks, with just enough time remaining to enter the data into Excel.

With the availability of a digital catalogue the task of reorganising the lots into taxonomic order was greatly eased. This meant adjustment of shelf heights to incorporate the various sizes of tubs and jars (some of the lots are 20 litre tubs full of holothurian specimens of a single species), and removing all the specimens in turn, which were then replaced first by taxonomic order then by station order using Excel to sort the data. The spreadsheet was updated with the new locations of the specimens as we progressed. The final part of the process involved cross referencing the specimens with the newly published papers and updating the names where they had changed (on both the specimen labels and in the spreadsheet).

There were numerous new species described during the ECOMAR project, which meant further problems in allocating the correct new name to specimens in the collections variously named as e.g. Peniagone sp. nov ‘pink’. While holotypes have been registered in the NHM, London, the rest of the material needs updating to current knowledge, a process which is often neglected, despite it being referenced in the many new publications resulting from the project.

It is very satisfying to have the ECOMAR collection properly curated and to know that I can locate any specimen needed easily. In total we curated, relabelled and catalogued a total of 1300 lots comprised of 1148 smaller jars, 88 tubs (between 5 and 20 litres) and 64 loan specimens. We plan to publish a detailed analysis of this work for the NatSCA journal, including a list of available species, and will make the catalogue available online when time and funding allow. In the meantime interested parties can contact Tammy Horton (tammy.horton@noc.ac.uk) for a copy.