In 2020 the Vertebrate Zoology collection at World Museum took a step towards ‘FAIR’ data sharing and began adding datasets of specimen records to the Global Biodiversity Information Facility (GBIF). There is always a trade-off between releasing datasets as soon as possible and ensuring they contain the most precise and reliable data possible. We’ve taken the view that through releasing these datasets, and encouraging their use, a positive feedback loop will incrementally improve data quality. That said, due to restrictions on other activities, one side effect of the Covid pandemic has been a little more time for in-house provenance research.

One collection I’ve focussed on during this time is that of prolific collecting duo, Herbert Christopher Robinson and Cecil Boden Kloss, which came to World Museum from the Federated Malay States Museums (FMSM) in 1914. Robinson, a former assistant at the Liverpool Museums, directed the FMSM from 1908 until 1926; Boden Kloss was the colleague ‘to whom he was much attached’. It seems that the FMSM specimens arrived in Liverpool without any additional documentation, so the collection locality information in our database (at National Museums Liverpool we use Mimsy XG) must have originally been transcribed from specimen labels with ‘place collected’ presumed to be Malaysia.Browsing through the database I noticed some specimens collected in 1913 with the locality ‘Malaysia’ but specific locale ‘Kohr Samui’. Backpackers will instantly recognise Koh Samui as the name of the gateway island to Koh Pha Ngan, infamous for its full moon parties.

Part of the table of contents of volume 5 of the Journal of the Federated Malay States Museums, available in the Biodiversity Heritage Library at https://www.biodiversitylibrary.org/page/19043211

Robinson and Boden Kloss wrote up most of their expeditions in the Journal of the Federated Malay States Museums which is now freely available in the Biodiversity Heritage Library (BHL). Assuming a ~1-year interval between expedition and report, sure enough, issue 3 of volume 5 (dated October 1914) is entirely devoted to collections made in Southern Thailand in 1913, including Koh Samui and Koh Pha Ngan (written as Koh Pennan by Robinson and Boden Kloss), and the mainland.

The mainland localities were a bit harder to narrow down. Collections were made in ‘Bandon’ province, now known as Surat Thani. Robinson and Boden Kloss didn’t provide a map but based on their descriptions of the collecting sites as south of ‘Chaiya’ and close to the border with ‘Nakon Sitamarat’ (= Nakhon Si Thammarat) it was possible to zone in on the southeast of the province. Furthermore, Robinson described the village of ‘Ban Kok Klap’ as being in ‘Lampum’. Wikipedia revealed that Lamphun district is now called Ban Na San. The nearby mountain site, ‘Kao Nawng’, is likely to be part of Tai Rom Yen National Park.

Map showing the collecting localities in Southern Thailand visited by Robinson and Kloss in 1913, available at https://tinyurl.com/yyebermb

Based on this research I have been able to update 27 specimen records with:

Names: I added the scientific names used by Robinson and Boden Kloss in their publications from 1914, with links to page URLs in the BHL.

Collectors: Besides Eibert C.H. Seimund, who is specifically mentioned in the report, it unclear if other FMSM staff also joined this expedition or if locals were engaged for hunting. Therefore in addition to Robinson, Boden Kloss and Seimund I have added ‘FMSM Peninsular Thailand expedition’ to the ‘collected by’ field to account for any unnamed contributors. 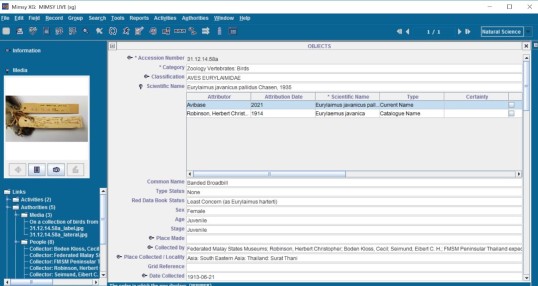 This work also revealed a few specimens requiring further taxonomic investigation as Southern Thailand is a transition zone for some subspecies (e.g. Blyth’s Strike Babbler). Provenance research is rarely as straightforward as the example here, but nevertheless, can deliver a wonderful sense of achievement. At the moment we’re content with localities as ‘place names’ or ‘features’, but future work would be to calculate georeferences.