2019 was an interesting year for me as I took on the role of NatSCA blog editor. It has been a great year and I have very much enjoyed reading all of the articles from our amazing contributors. To celebrate this, I wanted to bring together a list of our top ten most viewed blogs from 2019 in case you missed any of them.

Top scorers this year include a surprising number of botanical articles, with four of the ten written by our plant loving colleagues.

Some of my personal favourites, although not top scorers, are actually two articles which we were kindly allowed to re-blog: Annette Townsend’s beautiful and mesmerising work in how to make a wild strawberry sculpture from honey bee wax, and John Wilson’s fantastic article about the orang-utan specimens sent to World Museum, Liverpool by Alfred Russell Wallace.

But, here are the top ten most read NatSCA blogs by your good selves…

END_OF_DOCUMENT_TOKEN_TO_BE_REPLACED

The Horniman Museum is the custodian of a collection of ca. 175,000 fossil specimens, collected by Walter Hellyer Bennett (1892-1971). A mining geologist and palaeontology enthusiast, Bennett collected somewhat indiscriminately, not pausing to favour geography, strata, or taxa, which makes it a collection of great interest to a wide variety of academics, and for other uses such as exhibitions and loans.

This huge collection was bequeathed to the Croydon Natural History and Scientific Society in the 1970s, where choice pieces were put out on open display whilst the rest remained stored in Bennett’s original wooden cabinets. It contains some beautiful material, such as this Isotelus gigas trilobite, and Eryon propinguus lobster. 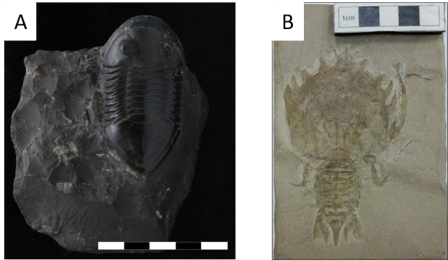 A) Isotelus gigas, and Ordovician trilobite from the Trenton Limestone. B) Eryon propinquus, a Jurassic lobster from the Solnhofen Limestone. © Horniman Museum and Gardens.

The collection is approximately 10% vertebrate material, 85% invertebrates, and 5% plants and trace fossils. In case you are interested in particular taxonomic groups (as we are keen on facilitating research enquiries and visits… fyi) the invertebrates are mostly bivalves, brachiopods, cephalopods, corals, and gastropods, with a large variety of other taxonomic groups represented in small numbers as well (please do get in touch if you’re interested in getting more information), and the vertebrates are primarily conodonts, crocodilians, dinosaurs, fish (including sharks), ichthyosaurs, mammals, plesiosaurs, pterosaurs, and turtles. Geographically, around 87% of the material was collected within Europe, primarily from the UK (50%) and France (15%). A further 10% is from North America whilst small amounts of material were collected from across Africa, South America, the Middle East, Asia and Australasia. Notable sites include the Solnhofen Limestone and the Burgess Shale.

END_OF_DOCUMENT_TOKEN_TO_BE_REPLACED

Wild about Portsmouth is a two-year Heritage Lottery Funded project to share and raise the profile of the city’s natural history collections.  In addition to enabling visitors to get more hands on with the collections through events and activities, work is being carried out to make them more accessible for museum staff and researchers.

The collections are held at three sites across the city and housed in environmentally controlled stores with many specimens held in archival quality boxes. However, the absence of a natural history curator for over 10 years has led to a series of challenges with accessing them:

Apart from the sizeable and substantial HLF Guermonprez Collection transferred from Bognor Regis Museum in the 1970s, very little was known about the collectors associated with the remainder of the natural history collections. In-depth knowledge of the HLF Guermonprez Collection has also been lost over time, although it is occasionally cited in publications by Sussex naturalists.

END_OF_DOCUMENT_TOKEN_TO_BE_REPLACED

On 13th March I travelled to Sofia in Bulgaria, my mind buzzing with questions about biodiversity data…

I had been awarded one of 30 funded places on the first training school of Mobilise, an EU initiative to mobilise data, experts and policies in scientific collections. More specifically, Mobilise is an EU COST Action: a bottom-up network funded over four years to boost research, innovation and careers by COST, an intergovernmental framework for European Cooperation in Science and Technology.

Digitisation and data management challenges in small collections promised new skills in the key basics of data quality and cleaning. It also offered a chance to meet colleagues from around the world, and connect to a bigger picture.

“There is more information about biodiversity in [the world’s] natural sciences collections than all other sources of information combined.” iDigBio

Collections’ biodiversity data: the what, when, where, who collected attached to many biological and palaeontological specimens © Bristol Museums