In March 2018 Portsmouth City Council was awarded a £79,700 grant to deliver a ‘Wild about Portsmouth project in order to raise the profile of the city’s Natural History collection. In addition to appointing a curator and an assistant, the project enables the development of natural history advocates and a team of volunteers to work on and promote the collection. The project also aims to engage with people in a variety of ways, from family activities to specialist workshops, with the view of participants helping to inform priorities for collection development and new displays.

As a curator with over 20 years’ experience in Hampshire, I have always been aware of the collection but had very little knowledge of it. The last Natural History Curator was 10 years ago and, apart from the occasional request, little had been done to develop the collection. An initial overview showed that the collection was (mainly) in good condition, packed into archival and museum quality boxes awaiting rediscovery.

One of the first tasks was to get an idea of the scope of the collections and their associated collectors. Another task was to recruit volunteers to assist with rearranging the collections to get them into taxonomic order and to catalogue them or update the Modes database with provenance data. To date 10 volunteers have been recruited and are currently working on the geology, shell and botany collections. Once the entomology collections have rehoused over the next few months (the cabinets are currently stored side-on making access to them rather difficult), volunteers will be recruited to re-stage, re-organise and catalogue them.

END_OF_DOCUMENT_TOKEN_TO_BE_REPLACED

This post is another in our series of presentation write-ups from the 2015 NatSCA Conference, Museums Unleashed!

How can we bring museum egg collections to life?

Egg collecting is now illegal in the UK and has been for many years. Possibly because of the legal situation, and the social stigma understandably attached to egg collecting today, museums can be reluctant to publicise their egg collections, even though they are entitled to do so. For example, out of the thousands of eggs held by Glasgow Museums, only a handful are currently on public display, which is a pity as they are beautiful and fascinating objects.

These issues form the basis of my PhD, which is a Collaborative Doctoral Award with Glasgow Museums and the Geography Department at the University of Glasgow. I have been researching the cultural and social aspects of egg collecting (also known as ‘oology’), which was a very popular pastime among both adults and children from the Victorian era well into the twentieth century. I have been researching collectors’ diaries held by Glasgow Museums, and also investigating the wider world of British egg collecting via old egg collecting magazines. This material has revealed some of the people, places, and practices of egg-collecting, which could provide new possibilities for communicating the stories of the birds’ eggs held by Glasgow Museums. 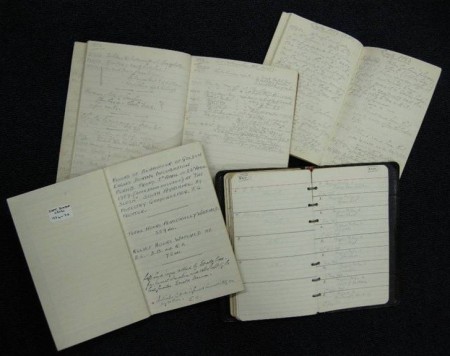 A selection of egg collectors’ notebooks and diaries

One of the most striking aspects of this research has been the interconnectedness of the British egg-collecting world. These connections can take various different forms. For example, egg collections have been donated to Glasgow Museums by individual collectors who knew each other, such as Captain Donald Cross and Peter Hay, who both lived in Ayrshire in the 1940s, where Cross was a farmer and Hay was a schoolboy. Cross shared his collecting knowledge with Hay, and sometimes even gave him eggs to add to his collection.

Eggs taken by a collector called E. S. Steward over 100 years ago have arrived at Glasgow Museums by two very different routes. Some were given by Steward to his friend Robert Arbuthnott, whose son donated his collection in 1967. More recently, in 2014, we received an egg collection confiscated by police after a collector was convicted of trading in eggs, some of which were very old. A few of these eggs were also taken by Steward, and must have passed through various different intermediate collections, along convoluted geographical journeys, before arriving at Glasgow Museums.

Eggs taken by another collector have ended up at different museums. On National Handwriting Day in January, the Natural History Museum’s brilliant oology Twitter feed featured a beautifully scribed red-legged cormorant egg from a collector called John MacNaught Campbell. He was the second Natural History curator at Kelvingrove Museum in Glasgow, and one of the earliest egg collectors to visit South America. Glasgow Museums also have some of his eggs, including this Antarctic goose set collected just three days after the Natural History Museum’s egg, on 3 December 1871.

Telling the interconnecting stories of these collectors, and others, could be a way of showing the human side of egg collecting, while being careful not to encourage the practice today. This could be via traditional media, such as museum exhibitions, online catalogues, or using social media.

Finally, a request: I’m keen to trace any other eggs that were collected by ES Steward, as I’d like to see how widely his collection has been dispersed. If any of you know of any of his eggs in your collections, I’d be very interested to hear from you, at e.cole.1@research.gla.ac.uk.

Museum collections have a variety of legal issues surrounding them and natural science collections are no exception. A variety of laws are in place to protect wildlife and these can have an impact on how collections may be used. To find out how the law may affect you join us for our Natural Science Collections and the Law seminar taking place on 8th February 2013 at the Manchester Museum.

Timetable for the day:

The seminar costs £35 for members or £50 for non-members (so why not use the extra £15 to join?), which includes lunch and refreshments. The deadline for booking is 7th January so fill in the form today.

Hope to see you there!