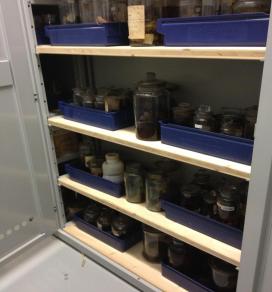 END_OF_DOCUMENT_TOKEN_TO_BE_REPLACED

Beetles are one of the most successful groups of organisms on the planet. In the UK there are over 4000 species, compared to fewer than 600 wild bird species and around 90 mammal species. Beetles are critical to the health of many habitats, through their roles as feeders on plants and fungi, recyclers of animal and plant debris, and as predators.

When I first began volunteering with natural science collections at Plymouth City Museum, I occasionally assisted local entomologist Peter Smithers of Plymouth University, who regularly ran ‘Bug Hunts’ with schools around the Devon and Cornwall area. It was here that I came across some of my first beetles. In 2010, whilst walking along the South West Coast Path near the chalk cliffs at Beer, I found a black beetle with a vinyl-like sheen. It was beautiful, but unlike anything I had seen before. I later discovered that it was from a distinctive group called Oil Beetles (Meloidae), which possess one of the most extraordinary life cycles of any UK insect: they are nest parasites of solitary mining bees such as Andrena, Anthopora, and Lasioglossum.

After a female Oil Beetle lays her eggs in a nest hole, the larvae (known as triangulins) wait on a plant until they can attach themselves to a passing bee, using hooks on their feet. The larvae then eat the stored pollen and nectar in the bee’s nest. The strategy means minimal effort from the adult female in raising her young, and the larvae have all the food they need. 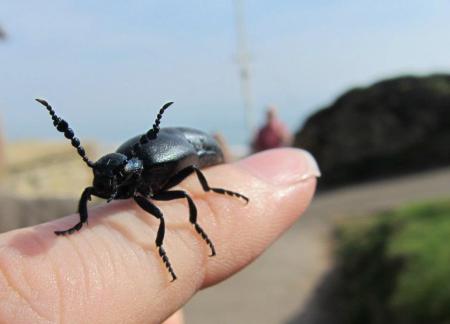 At the time of my discovery, Buglife was leading the way in trying to understand the state of Oil Beetle populations in the UK, which had suffered severe declines over the past 100 years. With four species believed to be extinct already, there was an urgent need to understand the distribution of the remaining Black, Violet, Rugged and Short-necked Oil Beetles. Buglife launched an Oil Beetle Recording Scheme to map their distribution and engage people of all ages through citizen science.

The survey results have enabled Buglife to learn more about the habitat preferences and hosts of the remaining species, and gain a better understanding of the health of the UK landscape, as Oil Beetles are restricted to wildflower-rich habitats, unimproved coastal grasslands, and woodland edges. Two species of Oil Beetle that were believed to be extinct in the UK have been re-discovered. The Short-necked Oil Beetle was found in South Devon in 2006, before a much larger second population was found on the Isle of Coll in Scotland in 2010. The rare Mediterranean Oil Beetle was found on the same Devon site in 2012, having been last recorded in Kent in 1906.

The efforts of Buglife, local recorders and naturalists have produced valid records to create time series of biodiversity data. Museum collections can also provide useful time series data for conservation efforts, based on specimen label data in terms of location and distribution in a given year. Where a species has been recorded in a particular place and time, we can perhaps find relic populations or sites for reintroduction. 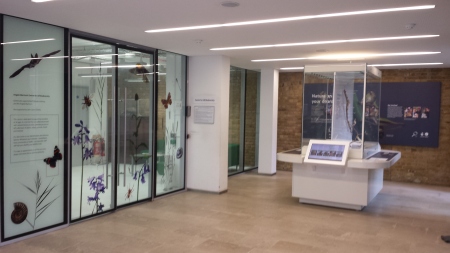 It was my interest in Buglife’s Oil Beetle recording scheme that led me to recently join the Natural History Museum’s Angela Marmont Centre for UK Biodiversity (AMC) as an Identification Trainee. The AMC provides world-class facilities in the museum’s Darwin Centre for citizen scientists, as well as expert and amateur naturalists, to enable them to identify UK species using the AMC’s extensive reference collections. Working here is brilliant, and I hope to be trained to identify the key UK biodiversity groups, gain more practical experience of surveying UK wildlife, assist the AMC team in developing citizen science projects based around museum collections, and continue to develop collections management experience through curatorial projects.