Welcome to the slightly late August edition of the NatSCA Digital Digest!

What Shall I Do?

Don’t forget to book your places for the Caring for Natural Science Collections workshop on the 17th October, if you haven’t already. It’s being held at the Oxford Museum of Natural History and should be lots of fun.

If you were planning on attending TetzooCon this year, time is running out: the dinner is already booked up (there is an alt-dinner, speak to Beth Windle for details) and I’m given to understand that over half the tickets have been sold already. Don’t miss out, it’s going to be bigger and better than ever.

END_OF_DOCUMENT_TOKEN_TO_BE_REPLACED

Many of us are freshly returned from a very successful NatSCA Conference, featuring over 20 speakers, trade stands and stores tours. We will be hearing more from them in the coming weeks. Watch this space on the 31st May! In the meantime you can catch up on their exploits by reading the Twitter stream.

In other conference-related news: The Royal Society Sexual Selection Conference is going on as we speak. As before, you can read all about it at the Twitter stream.

In the meantime, I’ve been on a Tyrannosaurus pilgrimage across the Mid-West. I visited some that I can talk about and others that I can’t yet but all of it was very informative. 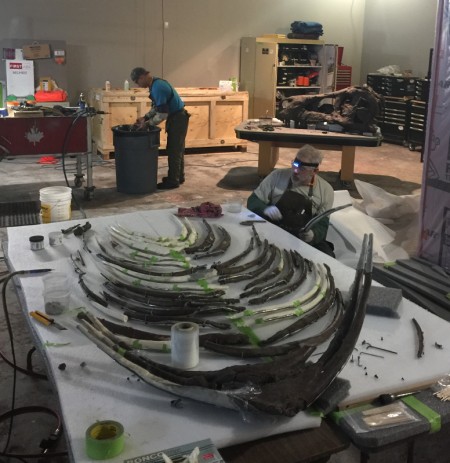 Not content with rocking the conference, Jack Ashby has been tearing it up at PubSci too, regaling us with tales from his new book. From cats that are killing Australia, to unrepresented penis worms – the talk was engaging and generated copious questions.

END_OF_DOCUMENT_TOKEN_TO_BE_REPLACED

The 2017 GCG Conference in Dublin was a resounding success. Our resident blogger Emma-Louise Nicholls has been co-opted onto the GCG committee – well done Emma!. I was unfortunately unable to attend the conference but I’m hoping that someone who did will volunteer a write-up for us.

Museums everywhere have been going all spooky for Hallowe’en. The Horniman Museum in Forest Hill turned their monthly lates event into the Bloody Late, a tour-de-force of spooky music and blood-curdling tours.

The Tetrapod Zoology Convention doubled the turn-out of previous years – made possible in part due to the venue change from the London Wetland Centre (near Hammersmith) to The Venue (near Holborn). NatSCA member Heather’s talk on the History of Zoos was great, as was our patron Ben Garrod’s account of working with David Attenborough and other windows into the world of TV science communication. There were lots of other great talks besides, which we will mention as we go along. The palaeoart workshop this year was mural-themed and presented an interesting challenge to create multiple species to scale across geologic time. My animal was a Microraptor, which I drew in the foreground because it was so small. Other people had sauropods in the background and they were still so big they were escaping the paper in places. Several write-ups of this event have been made – you and find some of them here and here. If you want to be kept informed about next year’s TetZooCon, I encourage you to join the Facebook group – they already have all the speakers lined up for next year if it remains a one-day event. They might stretch it to two if there’s enough interest.

END_OF_DOCUMENT_TOKEN_TO_BE_REPLACED

What Should I Read?

I encourage you to read Darren Naish‘s recent post on the “Mountain Beaver”, an unusual rodent which is not a member of the beaver family, nor is it mountain-dwelling. The article also goes into other members of the aplodontoidea so, if you like horned extinct cousins of the squirrel (of course you do), it’s well worth a read.

Why do all the beautiful things crack? Paintings by old masters, antique furniture, … and historical taxidermy. The Grant Museum has been running a project where they take their important taxidermy specimens in for essential conservation work and place stuffed toys on display in their place. A chance to see Jack Ashby‘s favourite teddy? You’d be crazy not to. For an example of the beautiful restoration work carried out by Lucie Mascord, check out this piece on the Owl Formerly Known as Googly-eyed.

What Should I Do?

What are you doing on the 22nd September? Keep it free if you can because we have a great workshop event coming up called Bringing the Dead to Life: How to Display Museum Natural Science. Among other things, you will hear testimonies from the Lapworth Museum, who were recently shortlisted for Museum of the Year.

END_OF_DOCUMENT_TOKEN_TO_BE_REPLACED

Picturing the world of the prehistoric is often likened to a jigsaw puzzle: one in which each new piece starts a whole new puzzle. Your pieces are scattered across all the museum stores in the world or weathering out of the ground. The quality is variable and some of the pieces are warped. In some cases we get lucky and find an immaculately preserved specimen, like the ones being uncovered in China, with evidence of soft tissue still preserved. In other cases, we must rely on osteological correlates in living animals to work out what’s going on.

Palaeontologist Mark Witton recently wrote a post about a group of predatory dinosaurs called abelisaurs. These animals have a rough, cornified texture to their skulls. Living animals with a comparable bone texture usually have hardened, reinforced skin. Hippopotamus faces regularly endure blows from rival hippo teeth and, while scarring occurs, lasting damage is usually avoided. Some theropod dinosaurs* show bite scars on their faces which suggest that something similar was happening with these too. Hardened, armoured skin would be very useful here. However…

END_OF_DOCUMENT_TOKEN_TO_BE_REPLACED

What a month we’ve had! The Conference at Cambridge on the 20th to 21st April was a roaring success. Over 100 museum delegates gathered together beneath the mantle of a Finback whale skeleton, to swap notes and revive old connections. Many heated exchanges were had over issues ranging from fungi to frocked wolves. No museum-based conference is complete without a tour of the stores – big thanks once again to the Zoology Museum for having us. We got a sneak-preview of the new gallery space too and, while I can’t post pictures of that, I can tell you that you have to go and see it when they open. Highlights for me included an elephant from Sri Lanka with links to Stanley Kubrik, and a Diorama of a beach with added surprises for future conservators. END_OF_DOCUMENT_TOKEN_TO_BE_REPLACED

Welcome to the August 2016 edition of the NatSCA Digital Digest: an oasis of calm in a raging tempest of olympics, Trump, brexit, austerity, and celebrity deaths.

Hannah Cornish has been writing about the often-overlooked gems of the museum collection: the slides. You can read it here.

Image courtesy of the Oxford University Museum of Natural history

So Pokémon Go happened last month: the Smartphone game that has been an unintended boon for the museum world. Several curators have weighed in on the phenomenon; here is Jack Ashby’s take on it.
News from Nature

The organisation which used to call itself “Nature First” has just demonstrated why that name was no good. In a shock announcement last week, Natural England seems to be favouring the lives of human-reared pheasants over the lives of the wild buzzard. We have watched buzzard numbers slowly recover over the past thirty years, it would be dreadful to see all that progress lost now – and even worse if the hunters mistake other struggling raptors (the Hen Harrier, e.g.) for a buzzard. Here is the RSPB’s response.
News from the Museums

I’ve been doing some travelling lately. I visited the Natural History Museum in Doncaster. It’s a small but delightful museum which has struggled through some hard times, as so many have, but makes the most of what it has. Its collections are benefitting greatly from having a specialist curator right now – long may it continue.

A little closer to home: I visited the Natural History Museum’s new Colour and Vision exhibition, which is beautiful despite not mentioning the Tuatara anywhere. The exhibition looks at the evolution of the eye throughout nature and the beautiful ways in which nature tries to catch the visual attention of others. If you’re in the area, I highly recommend it.

A montage of Trilobite sensory organs

I am delighted to announce that Deputy Keeper of the Horniman Museum, co-blogger, and good friend Emma Louise Nicholls is engaged to be married! I wish her and her fiance every happiness for the future.