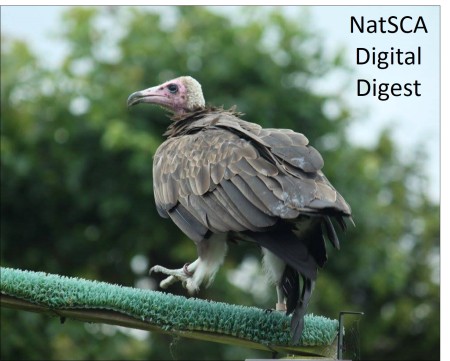 The 2017 GCG Conference in Dublin was a resounding success. Our resident blogger Emma-Louise Nicholls has been co-opted onto the GCG committee – well done Emma!. I was unfortunately unable to attend the conference but I’m hoping that someone who did will volunteer a write-up for us.

Museums everywhere have been going all spooky for Hallowe’en. The Horniman Museum in Forest Hill turned their monthly lates event into the Bloody Late, a tour-de-force of spooky music and blood-curdling tours.

The Tetrapod Zoology Convention doubled the turn-out of previous years – made possible in part due to the venue change from the London Wetland Centre (near Hammersmith) to The Venue (near Holborn). NatSCA member Heather’s talk on the History of Zoos was great, as was our patron Ben Garrod’s account of working with David Attenborough and other windows into the world of TV science communication. There were lots of other great talks besides, which we will mention as we go along. The palaeoart workshop this year was mural-themed and presented an interesting challenge to create multiple species to scale across geologic time. My animal was a Microraptor, which I drew in the foreground because it was so small. Other people had sauropods in the background and they were still so big they were escaping the paper in places. Several write-ups of this event have been made – you and find some of them here and here. If you want to be kept informed about next year’s TetZooCon, I encourage you to join the Facebook group – they already have all the speakers lined up for next year if it remains a one-day event. They might stretch it to two if there’s enough interest.

What should I read?

If you have been following the news recently, you will no doubt have heard that there’s a new book out that you absolutely must read: ‘Does it Fart?’, by Dani Rabaiotti and Nick Caruso, started life as an innocent Twitter conversation about snakes and rapidly turned into a peer-reviewed google spreadsheet of species data. The story was picked up by The Washington Post and Buzzfeed. Did you know that some species fart in self defence? Others do so to communicate and yet more do so simply because they’re not dead yet (I’m looking at you, zebras).

Dani has been giving talks at TetZooCon, PubSci, and many other places that are less NatSCA-affiliated too I’m sure. There are already Twitter talks underway for a sequel, so we wait with baited breath!

Where should I go?

There is a new Venom exhibition opening at the Natural History Museum, London. I haven’t been to see it yet but I shall be going at the earliest opportunity. While you’re there, do check out the Wildlife Photographer of the Year entries – some of them are just stunning (even if corvids did get a bit neglected this year).

That’s all for this month. Tune in again for more thrilling adventures with the Digital Digest!