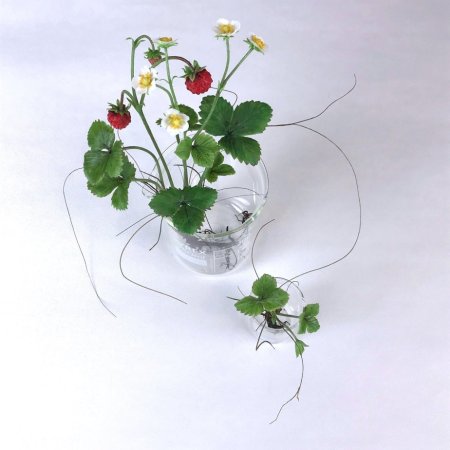 In November 2017 I attended the Cross-pollination, Revaluing Pollinators through Arts and Science Collaboration conference at Swansea College of Art. The conference marked the end of a successful and pioneering project funded by both the Arts and Humanities Research Council (AHRC) and the Arts Council of Wales, combining Art with Science to explore new insight into perceptions of the value of honeybees and wild pollinators.

As an artist I’ve spent most of my career working alongside scientists on science communication projects and my current work focuses on the protection of nature and features pollinating insects, so the project was of great interest to me.

At the conference I heard many fascinating lectures and discussions but it was my chance conversation with Assistant Professor Scott McArt, from the
Entomology Department at Cornell University, that sparked a creative idea which has developed into a collaborative piece of artwork, which is now on display in the new PolliNation exhibition at the Mann Gallery in Cornell. 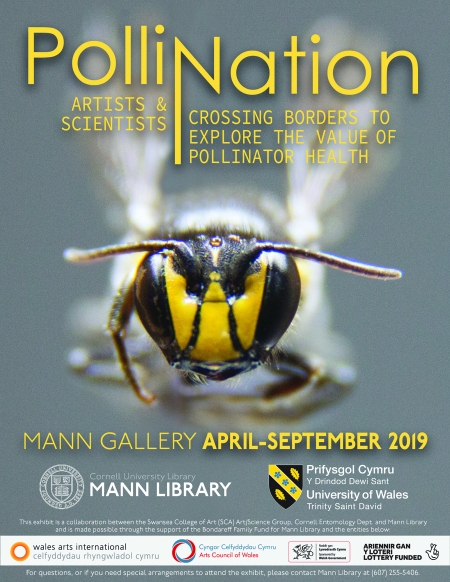 Scott’s NYS Beekeeper Tech Team at Cornell had been conducting research to promote best management practices to improve honey bee health and reduce colony losses. The team had been examining pesticide levels in wax from honey bee colonies in New York State and had collected many wax samples which were analysed and shown to contain pesticide residues. The honey bees had been visiting wildflowers which were contaminated with agrochemicals and transferring those chemicals to their wax. I specialise in creating botanical sculptures with wax, a skill that I learnt whilst caring for a unique collection of over 1000 wax models in the Amgueddfa Cymru scientific collections. The idea for the artwork was to use the beeswax containing pesticide residues as an artist’s material to create sculptures of the contaminated wildflowers. The pesticides residues would be listed clearly as the materials used to create the work, thus communicating Scott’s research in a subtle and powerful way.

I decided to start by creating some test pieces to see how feasible it would be to work with the Cornell wax. Scott was able to post me some wax samples from his lab, which I melted down to remove any traces of honey, then coloured and sculpted into flower forms. The wax was very flexible and easy to work with in comparison to the refined white beeswax that I normally use.

Time lapse video showing the beeswax honeycomb which was supplied by Scott’s lab at Cornell University, melting in my wax melting pot. 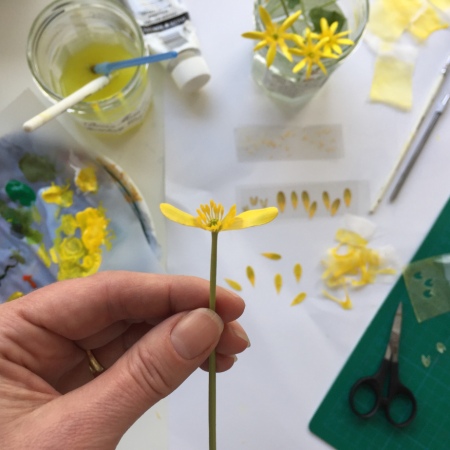 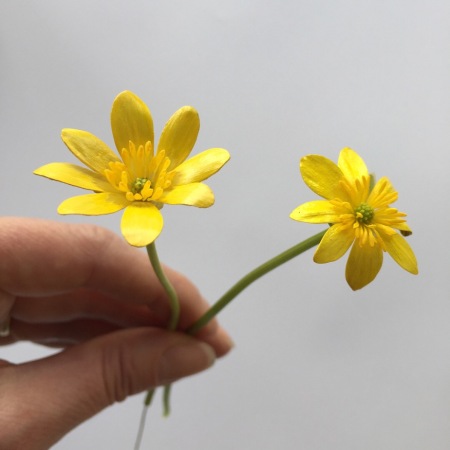 The finished Celandine test piece made from beeswax on the left and the real Celandine flower. specimen on the right. © Annette Townsend

The next stage of the project was to choose which wild flowers to represent in the final piece of artwork. I was able to look at reports from the NYS Beekeeper Tech Team on pesticide residues and data from Scott’s lab on pesticides in wildflowers that are adjacent to apple orchards New York. One of the wildflowers listed was Fragaria vesca, Wild strawberry, which contained one of the highest levels of total pesticides recorded in parts per billion. I decided to focus on this plant not only because it was loaded with pesticides, but also because it was a common wildflower in both the Ithaca region of New York State and here in South Wales. Luckily I had some wild strawberry plants growing in my front garden which I was able to use as fresh reference material, even if it was winter and there were no fruits or flowers to be seen! 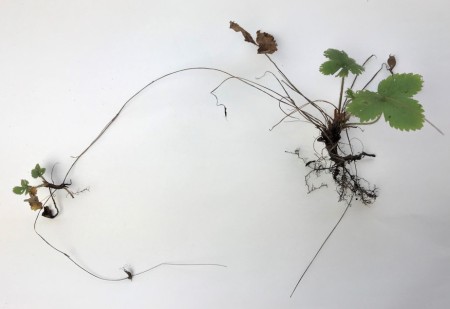 Wild strawberry plant specimen collected from the front garden of my home in Cardiff. © Annette Townsend

I also visited the vascular plant herbarium at Amgueddfa Cymru, National Museum Wales to take photographs and record measurements of dried and pressed Fragaria vesca specimens collected in America and the UK. 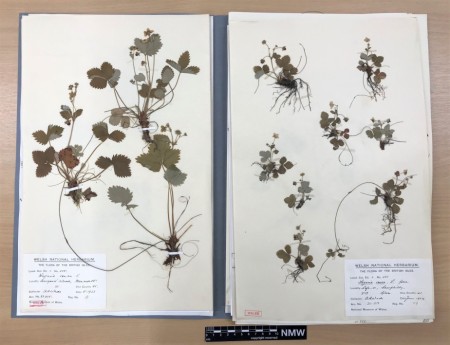 The final sculpture took several weeks to complete. I created moulds from the fresh plant leaves in my garden with silicone and plaster, which I then cast in coloured molten wax. I made stems and plant runners from waxed tinned copper wire, and petals, sepals and stamens from waxed silk fabric and threads. The strawberry fruits were made from wax coated dressmaking beads and I attached tiny plant hairs made from silk to the stems and leaves. The sculpture was finished with acrylic paints and varnishes and displayed in Pyrex glass measuring beakers in reference to the scientific nature of the work. 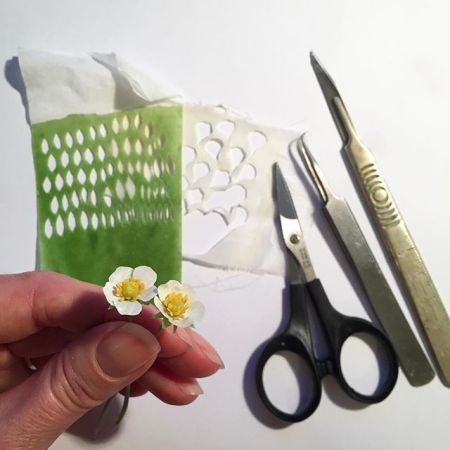 Making the flowers from waxed sheets of silk. © Annette Townsend 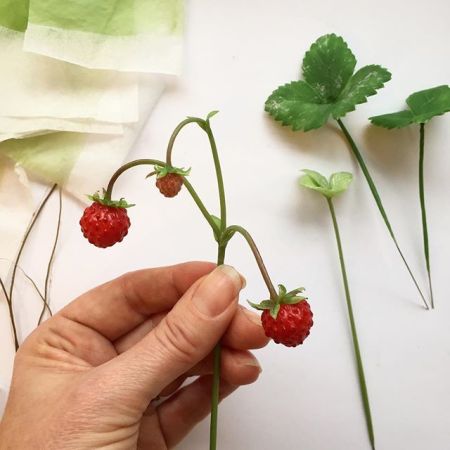 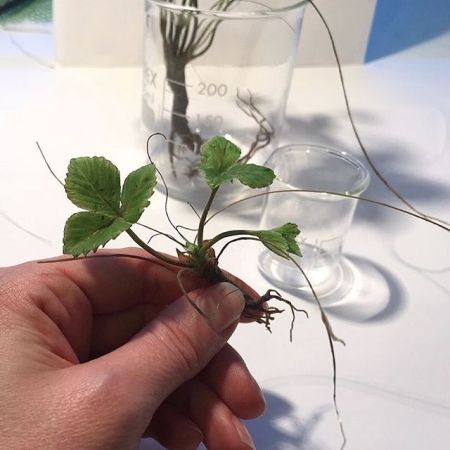 Time lapse video of me making moulds of the wild strawberry leaves from my garden with Plaster of Paris and silicone rubber.

*These pesticide residues were also found on nearby strawberry flowers. 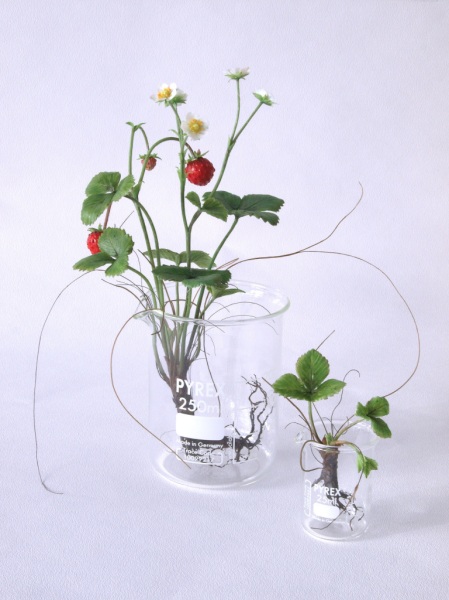 Finally, the delicate sculpture had to be packed for its journey to Cornell University. I placed it in a strong cardboard box and secured it with dressmaking pins and Plastazote supports to prevent any movement. It was then carried in hand luggage on a flight to America by one of the project artists and was carefully unpacked and set up in the display. 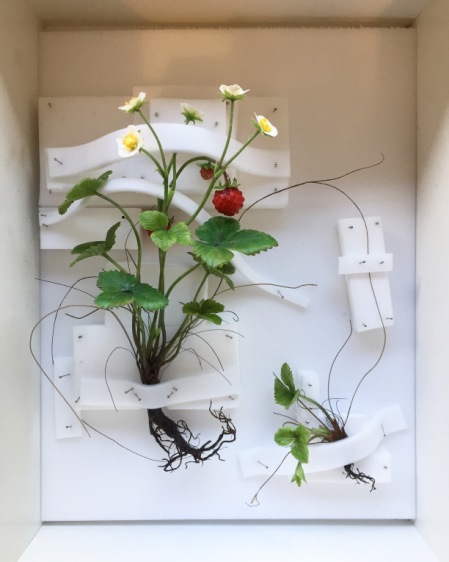 The sculpture made ready for travel, with pinned Plastazote supports. © Annette Townsend

The PolliNation exhibition at the Mann Gallery runs from April 15th until 30th September 2019. 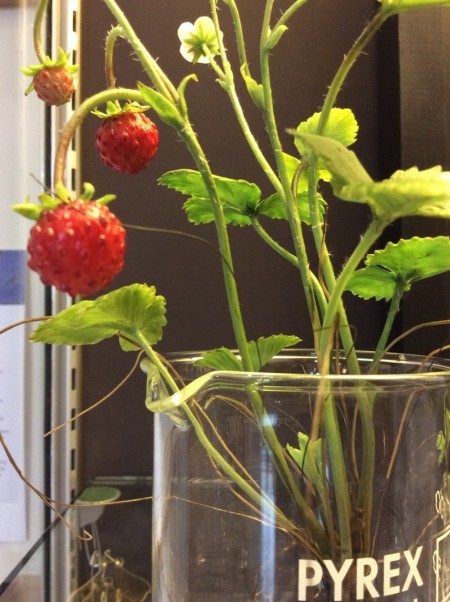 Close up of the sculpture on display in the PolliNation exhibition. © Annette Townsend

Many thanks to the artists, Linda Norris for inviting me to the Cross-Pollination conference and Sarah Tombs and the Swansea College of Art, Art/Science group for kindly including my work in the Cornell Mann Gallery display. Thanks also to the scientists, Assistant Professor Scott McArt for giving me the opportunity to create a piece of artwork from his research and to the National Museum Wales botany curator Sally Whyman for sharing her expert knowledge of the collections.