Written by Maggie Reilly, Curator of Zoology at The Hunterian Museum (Zoology), University of Glasgow.

“Huzzah!” (or something similar) my colleague Adam and I cried as we put the last of our bird skin collection in its new home – the rather swanky Bruynzeel (other brands are available) drawers that are part of the new storage arrangements for the Hunterian at the Kelvin Hall in Glasgow. We don’t have a huge bird collection here at the Hunterian – well, not by some people’s standards, but we do have some pretty special stuff. Cataloguing is not complete (is it ever?), but to date here are the stats: Bird skins 3,587; Bird mounts ca. 450; National Nest Reference Collection ca. 2000; Eggs ca. 1000; Bones ca. 100?; Wet-preserved>30. I am going to focus on the skin collection here.

New storage at the Kelvin Hall for mammal, bird skin and mount collections. © The Hunterian, University of Glasgow.

Most of the skins were moved along with the rest of the Hunterian’s study collections, over the last two years to our new home the Hunterian Collections Study and Access Centre at the Kelvin Hall. The latter, adjacent to University, is an iconic building in Glasgow which has served many purposes in its 100 year history. It is now a partnership between the University of Glasgow, Glasgow Life and National Libraries of Scotland, to provide access to museum and library collections, and sports facilities.

Organising and moving the collections has been a monumental task and is still underway for other parts of the collection.  Thankfully it has mandated much hands-on time with the collections, previously a rare treat.

One of the intriguing parts of the skin collection are 750 or so specimens from Colonel Lawrence Augustine Waddell. Amongst other things, he was a doctor, soldier, explorer, and orientalist of controversial opinions. He was also a naturalist, collecting and publishing on the birds of the Himalayas. He bequeathed his collections, library and papers mostly relating to his studies on Buddhism, and bird skins to his alma mater, The University of Glasgow.

The birds were collected in W. Bengal, Assam, Sikkim, Bhutan, Nepal, Tibet around 1891-1892. In 1893, Waddell published his book ‘The Birds of Sikkim’. Our skins bear handwritten labels with the scientific name, a vernacular name (Waddell was also interested in languages), a place name and the altitude. The locations are often difficult to decipher so our collection records will have inaccuracies. If there are any experts out there on Himalayan place names as at 120 years ago, then please help us out….

A velvet-fronted nuthatch specimen with label showing vernacular name and locality. This one we can read – it’s Namchi in south Sikkim. © The Hunterian, University of Glasgow.

The birds are catalogued in KEmu and limited records of them can be viewed online here.

Apart from Waddell, other interesting specimens are skins (eggs too) from Sri Lanka, collected in 1908 for or by Glasgow academic and industrialist Sir J.H. Biles. Though sadly, we know almost nothing about his interests in natural history.

A white-bellied drongo from the Biles collection. © The Hunterian, University of Glasgow.

Most names on the skins were over 100 years old and often obsolete so required updating. It is not always straightforward to do this and mostly we had to assume the original identifications were sound. We are not specialist ornithologists.

There are a number of skins from Fair Isle (taken 1925/26) collected by George ’Fieldy’ Stout, and they must be part of early data collecting on migratory birds before the Fair Isle Observatory was formally set up. It’s not known how we acquired them, but maybe it is associated with the magnificently named William Eagle Clark, former bird curator at Royal Museum of Scotland (now NMS) and leading light in the Fair Isle studies.

There are some syntypes of Australian noddys (spotted by Clem Fisher some years back – thank you Clem!) collected by John Gilbert, and associated with John Gould. We have since discovered a number of other Australian birds with ‘Gould’ enigmatically written on labels. Another one for more historic research…

Skins from Sarawak, Borneo from Charles Hose are present in the collection presented in the year of his death, 1929. Hose was a larger than life figure who served as a colonial administrator for the second Rajah Brooke. He is well known as an ethnographer and provided specimens for the British Museum, but he also was a considerable zoologist and geographer mapping Sarawak and discovering and describing new species of animals. 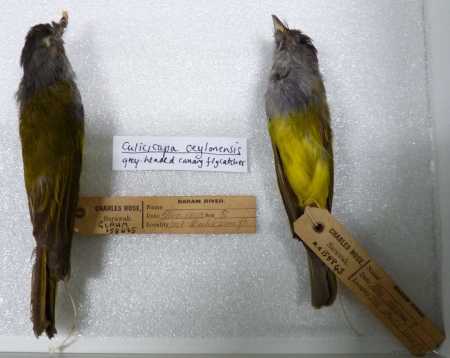 Birds from Mount Dulit in Sarawak. Hose spend the first part of his career in Borneo as an administrator in the Baram River district. © The Hunterian, University of Glasgow.

Some specimens have frustratingly lost their data or never had good data – these include a number of Kakapos and an extinct Paradise parakeet. Lesser luminaries amongst the data-poor birds have recently proved their value too. The Hunterian has a very fine 18th century Maori cloak decorated with small bunches of feathers. This cloak is going on loan abroad, and so the feathers needed to be identified for CITES purposes. Former colleague Emeritus Professor David Houston and myself had a rewarding afternoon identifying the bird species from whom the feathers had been taken. We were able to use assorted New Zealand endemics, including these data poor specimens to evidence the identity of the feathers.

Purple swamp hen feathers in situ on the cloak with kiwi and kea feathers present too. © The Hunterian, University of Glasgow.

One of our purple swamp hen skins. © The Hunterian, University of Glasgow.

Working on these skins has been a pleasure. We know a lot more about bird taxonomy (thanks Howard and Moore 4th Ed.!), packing and handling skins, our collection and its history, and there is much still to follow up. We have gained the satisfaction of seeing these historic specimens finally getting the good quality storage they require.

Hopefully we have made this material and its research potential more visible. Many of the skins were collected in biodiversity hotspots where assorted assaults over the last 100 odd years have diminished or destroyed those habitats. Those of us in natural science collections have understood and defended the intrinsic value of these collections forever. Others – researchers, climate scientists, ecologists – are also now recognising the worth of this vast biobank that we hold as our collections.