In a blog series hosted by the Horniman Museum, each month I (the Deputy Keeper of Natural History at said Museum) select a specimen from our collections, do a little research, hopefully find out some riveting and hitherto unknown piece of historical information about it that can be added to our database, and write a blog in a format accessible for the general public. It is one of my pride and joys in my job as it covers so many different aspects of museum life- public engagement, outreach, research, museum documentation, collections management, etc. This month I managed to go a step further and incorporate not just exhibition content into the article (British Wildlife Photographer Awards temporary exhibition), but also a new avenue of research and interest; a 6000 strong army of hawfinch enthusiasts who take to Twitter to record sightings of this shy but glorious little bird. I asked the followers of @HawfinchesUK if they would like to publish an image they had taken and was subsequently presented not just with photographs, but with fascinating insider information of the birding world that I may not have found by my own research.

What a wonderful collaboration of scientists and enthusiasts, and an exceptional reward for the utilisation of social media. Please enjoy:

This article was originally posted on the Horniman Museum blog.

New delights at the Horniman

We currently have the pleasure of playing host to the British Wildlife Photographer of the Year exhibition. These 87 invariably fetching images were submitted across 13 categories including the intriguingly named ‘Hidden’, which got imaginations whirring and macro-lenses reeling.

In the Habitats category, a colourful hawfinch sits in a cherry tree, showing off its striking golden eyeshadow and jet black ‘beard’ in remarkable detail. It also reveals the ‘ringing’ that is evidently being carried out on this species in the shape of jewellery about both of the finch’s ankles. The gifter of these adornments is a brave soul indeed. As much as I too would like to get up close and personal with such a beautiful bird, its incredible bite force makes this comparatively tiny bird capable of cracking open tough nuts such as cherry stones, the human equivalent is a force of 60 tonnes. I don’t think I have enough space in my mouth for that kind of muscle power. 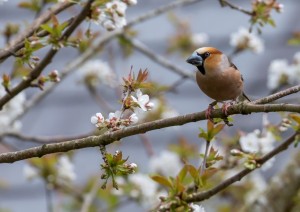 This image, taken by Jeremy Moore, shows off the beauty of this bulky* but shy finch species.

Twitching is a coincidence

This rather eye-catching bird is not one I’ve ever had the personal pleasure of seeing in the wild. However in carrying out research for this article I came across, and am now an avid follower of, @HawfinchesUK on Twitter (there has to be a pun in that alone) which documents hawfinch sightings throughout the UK. The regular images of this beautiful bird popping up in their Twitter feed brighten a dreary autumn day and I’ve become thoroughly sold on the idea of a becoming a birdwatcher, who I am reliably informed are not to be called twitchers. Fair enough I’d say… as a palaeontologist I get extremely irritated when someone says- “Oh you mean like archaeology?” (Another blog for another time). The word ‘twitcher’ is connected to birdwatchers purely, it seems, due to a gentleman called Howard Medhurst, a British birdwatcher. Depending on your source, his twitching is attributed to either a ‘nervous behavioural trait’ of his, or alternatively his shivering in the cold. Bracing against the English winter (and occasional summer) is not something specific to birding, but I can imagine it gets pretty darn chilly sitting motionless in a hide awaiting the arrival of a bird on its own schedule. I quite like the word twitcher, and it certainly appears a damp and chilly day in this nevertheless stunning image caught by birdwatcher Nick Truby, but it is for birdwatchers to decide on their own noun. 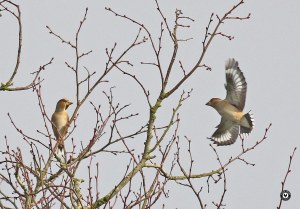 Two hawfinches in a hornbeam tree, taken in Great Hampden, Buckinghamshire. Note the striking patterns on the wings and tail, being kindly displayed by the bird on the right for your appreciation. Image used with kind permission of Nick Truby, © Nick Truby.

The Horniman Museum has an alluring case of taxidermy hawfinches that belonged to the esteemed taxidermist and wildfowler Edward Hart (1847-1928). The description of the case on the Museum’s database and Hart’s original catalogue lists the fine feathered figures as ‘two adult males, one immature male, and one adult female’. Those of you got as far in maths as four will notice that only three hawfinches adorn this case; one is intriguingly absent. The missing male absconded before the case arrived at the Horniman in the 1980s and his original incorporation is only known of at all due to Hart’s description of the case.

Of the three remaining finches, the doleful looking one on the left is the female, identifiable by her slightly lighter plumage (or ‘much’ lighter in the case of certain faded historic specimens). The resplendent young man in flight is an adult male in his summer finery (the missing finch was in winter plumage), and in the bottom right is an immature male, indicated, as in many human teenagers, by the spots on his chest. Hart collected, and subsequently prepared, all three himself between 1873 and 1896 in Christchurch, Dorset**.

It is possible that the female (on the left in the image below) has faded, or perhaps that she was always slightly paler (leucistic) than your average lady hawfinch. Certainly, oddities were a fascination amongst Victorian collectors such as Hart. Thoughts on an electronic postcard (@HornimanMuseum).

Edward Hart would collect, prepare and mount the taxidermy specimens himself.

* I’m not being rude, they are genuinely the UKs largest finch species

** During Hart’s lifetime Christchurch was located in Hampshire, but has since been adopted by Dorset