I have a strong suspicion that an object that is now in our collection at the Grant Museum was in fact a souvenir bottle of plum brandy. How could such a thing happen? 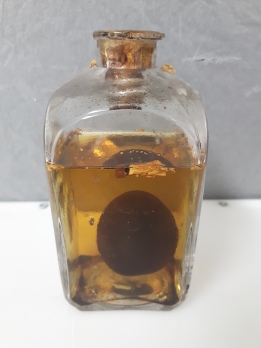 The mystery specimen in its original fluid before conservation. Is it in fact a bottle of plum brandy that a researcher bought as a souvenir? (C) UCL Grant Museum of Zoology.

My former colleagues Mark Carnall and Emma-Louise Nicholls first brought this “specimen” to my attention in 2011, when they found it in our wet specimen store: an unmarked bottle of clear brown liquid containing a near-spherical object with a cork stopper in its narrow neck. Mark wrote a blog at the time working through the process of elimination of all the spherical objects that might belong in a zoological collection such as ours. While others had assumed it was a testis, Mark and Emma decided that it was in fact a plum – not zoological at all. Aside from its identity, the other question was: how did a 25mm sphere get in a bottle with a 10mm neck?