The most recent exhibition ‘Extinction or Survival?’ at Manchester Museum has brought many interesting ideas and suggestions from a wide group of visitors about how we can change our future. Several comments have mentioned animals kept in museums and collections, for example, “Stop killing animals to put in a museum” or “help all the animals by collecting DNA … and … not get stuffed like … in museums”. These comments have inspired me to write about the importance of natural history collections, especially the value of bird collections.

Comment card left at the ‘Extinction or Survival?’ exhibition at Manchester Museum, 2017.

Whether collecting birds for science is still necessary remains a hotly debated topic. However, the value of scientific collections cannot be questioned. Research or reference collections are still making crucial contributions in documenting biodiversity in time and space, and understanding species’ ecology and evolution, vital for conservation strategies. Furthermore, collections and museum have an important role in preserving and caring for past and present natural heritage and providing educational opportunities.

Can Collecting Birds for Science be a Threat to Natural Populations?

Among the most significant causes of bird mortality in the UK are window strikes, for example against houses and buildings, and capture by domestic cats. The British Trust for Ornithology estimates that up to 33 million birds are killed by windows each year. The Mammal Society estimates that 55 million birds are caught by cats annually. By contrast, all bird collections in museums represent only a tiny fraction of the above numbers. But even cats do not cause decline in natural populations, in fact, the most significant threat to bird species worldwide is habitat loss.

Bird Collection Behind the Scenes

Manchester Museum holds around 15,000 study skins, or bird specimens, from 3,000 different species, they were mostly collected between 1850 to 1950. All study skins are kept in labelled drawers in cabinets, organised in taxonomic order. If you want to know where the Manchester Museum’s birds come from, see here.

Study skins are different from taxidermy. Taxidermy preserves an animal in a lifelike position by stuffing and mounting the body for display in galleries and exhibitions. On the other hand, a study skin preserves the animal in a simple, un-lifelike position (in birds, resting on their backs), but useful for research. All the information associated with the specimen is kept on a label attached to the study skin. 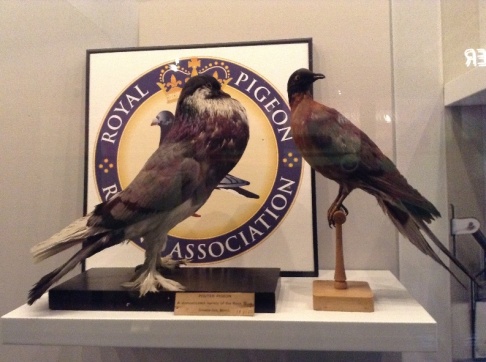 Why Scientific Collections are Important

Natural history specimens provide useful information for disciplines such as taxonomy, anatomy, morphology and ecology, among many others. The information associated with each specimen, for example, date and location, also provide important information about distribution, diet, breeding, geographical variation and much more. Darwin’s theory of evolution would not have been conceived without collections.

Many study skin labels can be found around the museum galleries.

Label of a male Passenger Pigeon (Ectopistes migratorius), now extinct, collected in Toronto, Canada in April 1875 by I. Morley. ‘Extinction or Survival?’ exhibition.

Bird books have always been a useful tool, not only for ornithologists, but also for birdwatchers. To identify species, illustrations can describe patterns, colours, shapes, sizes and other characteristics better than photographs. Many illustrators and painters have been using bird study skins for this purpose since the early 19th century.

Johannes Gerardus Keulemans was a Dutch bird illustrator, working in England in the 19th century. His illustration of Great Northern Diver can be appreciated in Nature’s Library next to the bird specimen that inspired it. The specimen is part of Henry Dresser’s bird collection, held at the Manchester Museum since 1899.

Cover: A Guide to the Birds of Colombia.

Cover: The Birds of South America.

After many years of remaining lost in drawers in museum collections, new bird species can come to light. Ornithologists revising and working with collections have described new species that were previously confused with similar species, often due to poor data on their labels. Many of them are now rare or possibly extinct. For example, Antioquia Brush Finch (Atlapetes blancae) was described by British ornithologist Thomas Donegan in 2007 from just three specimens in Colombian museums. It has not been seen in the wild since it was collected in 1971. It is currently classified as Critically Endangered (Possibly Extinct).

Who knows what may be in Manchester Museum waiting to be discovered?

Locality information on labels, that is, where the specimen was found, is vital for studies to predict changes in animal distributions due to climate change. These modern techniques make use of specimens that were collected long before computers or scientific climate models. A study in Colombia using different scenarios to predict the effects of climate change on globally threatened birds showed that in most cases species were projected to have smaller ranges while some others disappeared as a consequence of climate change. Museum collections were the main source of data for the models. 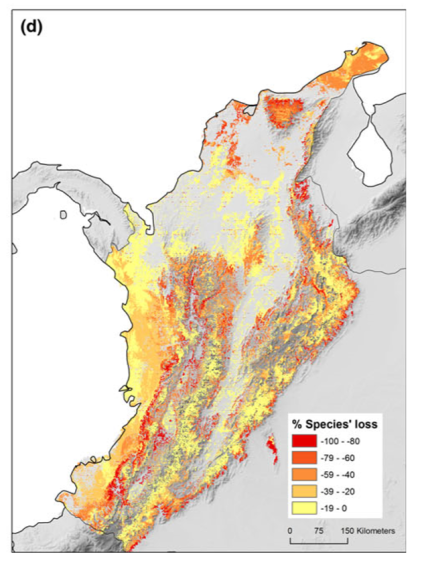 There are still many questions to be answered about evolution. A project attempting to understand how and why bird species evolved and colonized different places on Earth used 3D scanners to analyse the size and shape of bird beaks from the Natural History Museum at Tring and Manchester Museum. The project is being run by the University of Sheffield with help from more than 1500 volunteers. More information on how to take part can be found here.

In conclusion, stuffed birds on show at museums, and in the vast collections behind the scenes, are not just dead animals, they are museum specimens, with important associated information. A vital role of museums is to make sure this information can be used today to help us understand more about birds and to conserve wild populations within their natural habitats.