Natural history is one of the branches of science whose methods and traditions are most often referenced by contemporary artists. A flock of the installations that we find in leading galleries echo, reflect, borrow from and parody the ways that natural history works.

Elsewhere artists point to natural history as a part of our human society, performed in the wild, beyond the walls of museums and universities. For example, Natural Selection by Andy and Peter Holden (currently at The Towner Gallery in Eastbourne until 20th May) tells the story of the people obsessed by the illegal practice of collecting bird eggs.

Work in the museum and in the wild are two central pillars of natural history. One artist who shadows the practices of both is the American artist Mark Dion. His exhibition, Theatre of the Natural World, is showing now at the Whitechapel Gallery in London until 13th May. As a natural historian who works in museums and undertakes fieldwork, I am always interested in art that encourages me to step back and reflect on how my profession actually operates.

Sometimes what it shows me is funny, sometimes it’s sad, and sometimes it’s disturbing. Such art can be a highly effective means of communicating just how absurd some aspects of natural history are. Much of Dion’s work highlights the subjective, peculiar and inconsistent ways that taxonomy operates: it is an entirely human construct intended to place order on the impossibly disordered living world. 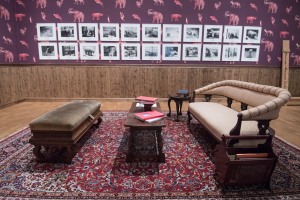 Elsewhere his art highlights the plight of endangered species and habitats in much the same way as specimens do in natural history museums. The Naturalist’s Study, 2018, is a room lined with wallpaper depicting recently extinct species, such as thylacines, dodos, passenger pigeons and great auks: all are museums favourites. The room contains works that point to biodiversity loss: Dead Trees is a series of trees drawn using tar, and a large series of black and white photos of taxidermy polar bears from museums across the world can’t help but remind us that all these individuals are dead (and for our own gratification). 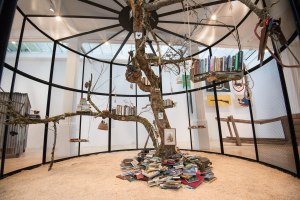 The centrepiece of the exhibition is The Library for the Birds of London, 2018. It is a large round aviary containing a dead apple tree. Around its base, and on shelves on its branches is a huge collection of bird-related literature: field guides, ornithological writings and related novels. The paraphernalia of both bird-watching and hunting hang from the tree: binoculars, ammunition, pith helmets and cameras. Nailed to the trunk are photos and drawings of great naturalists, from Darwin to Attenborough.

All of this acts as the habitat for 22 live zebra finches. Visitors are invited to walk into the aviary and spend time observing the birds at extremely close quarters. They are chatty, busy, beautiful little animals and being surrounded by them in this way brought a smile to the face of everyone I watched. Dion says that the work is principally “about empathy and identification”: that he wants viewers to notice their individual personalities and quirks. 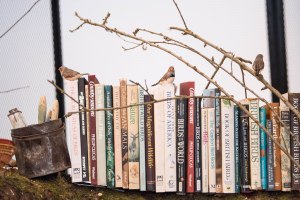 The other take-home message is that humans have constructed a great industry around the observation of birds and the amassing of knowledge about them. Seeing photos of Sir David Attenborough and all those books coated in the finches’ poo highlights just how utterly indifferent the birds are to all our attention. They don’t care that we care.

On the topic of empathy, for me, while the chatterings and flutterings of the birds in the cage may appear to be joyful, it was nothing compared to the elation I’ve experienced when encountering wild flocks of thousands of zebra finches in their native Australia. The empathy I felt related to their captivity. Signage makes clear that “This work has been created with advice and consultation from the RSPB”. It said that the wellbeing of the birds was under constant scrutiny and vets were on hand 24/7 should anything go wrong.

This messaging – as important as it is – appeared at odds with a potentially controversial piece that appears later in the exhibition: an excerpt from “Some Notes toward a Manifesto for Artists Working with or about the Living World”, which formed part of a catalogue Dion wrote in 2017. It stated that

“Artists working with living organisms must know what they are doing. They must take responsibility for the plants’ or animals’ welfare. If an organism dies during an exhibition, the viewer should assume the death to be the intention of the artist”.

Thinking of artworks like Hirst’s A Thousand Years, 1990 – where flies hatch from maggots, trapped in a vitrine with an electric fly-killer – it is easy to see the artist intended for the animals to die. But with Dion’s Library, the text highlighting attention to the birds’ wellbeing recognises that they are supposed to live, but they may not.

Elsewhere Dion provides information about the natural history of the zebra finches, much as a museum might do. I was thrilled. This recognises that when artists incorporate animals into their work, viewers aren’t only interested in the art, but also in the animals. They are more than artists’ materials. People are curious about “facts” as well as the artist’s intentions. Similarly, what was unusual about the Holdens’ Natural Selection is that almost half the exhibition is essentially a beautiful video about how birds make nests. It is unclear what made it “art”, rather than a natural history documentary.

Satisfying the viewer’s curiosity for information is something that not all artists do. For example, when I saw The Physical Impossibility of Death in the Mind of Someone Living, 1991 – Damien Hirst’s preserved shark, I heard ten or twelve visitors asking the same question as me: what kind of shark is it? It’s a tiger shark, but it didn’t say so anywhere. Hirst is using natural history museum techniques to make art that isn’t about natural history. There’s nothing wrong with that, but would it take anything away from the art to stick the word “tiger” in front of the word “shark” on the list of materials on the label? 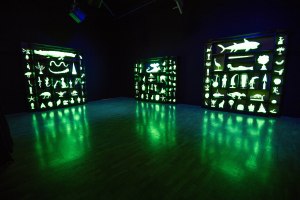 Dion’s Theatre of the Natural World is very different. It really is about natural history – the techniques, the intentions, the emotions and the knowledge. It is also visually arresting. In the exhibition’s final room, The Wonder Workshop, which is almost pitch black, are Wunderkammer-style cabinets containing “ghosts” of objects from seventeenth century engravings. Bright green crocodiles, conch shells, corals and fish shine brightly in rows on the walls. Nothing else is visible.

I initially thought these were digital projections or holograms. In fact they are clay sculptures coated in luminescent paint. The trope of artists recreating Cabinets of Curiosities is becoming stale, but what Dion achieves with this room is extremely refreshing. Making the physical appear digital is an astonishing skill.

Jack Ashby is Manager of the Grant Museum of Zoology at UCL, and author of Animal Kingdom: A Natural History in 100 Objects.