The exhibition takes us through four different themes – ordering, displaying, observing and making nature. Together, they demonstrate that human ways of encountering, standardising and talking about nature are essentially unnatural. But it’s the only way we know how.

Wellcome Collection goes by the strapline “a free destination for the incurably curious”, has permanent galleries around the history of science and medicine with a lot of science-inspired art, and a varied temporary exhibitions programme. With these “it explores the connections between medicine, life and art in the past, present and future”. I think they have carved out a niche for themselves whereby they are distant enough from the natural history sector to impartially critique it, but close enough to have a good view.

Not that Making Nature is critical of natural history museums, but it tells the story of our discipline, through those four themes, in a way where the human story – rather than the animal or plant one – is at the centre.

Opening with the “Ordering” section, the exhibition considers the artificial structures that humans have imposed upon the natural world through our varied taxonomic systems, asking why and how we have sought to classify. Linnaeus is obviously the focus, but any fans of taxonomic history will be pleased to see that the fictitious classification of Jorge Luis Borges (who claimed it was from an ancient Chinese text called “Celestial Emporium of Benevolent Knowledge”) is included.

Mocking the idea that all attempts to classify are artificial (as much as they are essential), he splits all animals into 14 categories:

Those that belong to the emperor

Those that are trained

Those that are included in this classification

Those that tremble as if they were mad

Those drawn with a very fine camel hair brush

Those that have just broken the flower vase

Those that, at a distance, resemble flies

The exhibition is arguably more 3D that many that Wellcome produce (which often heavily rely on 2D art and library special collections), which reflects the object-based focus of natural history. Objects have been borrowed from a wide number of institutions and there are some real treats in there – Darwin’s pigeons and a Linnaean type specimen are among them. 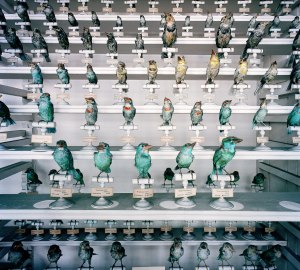 The art is also particularly evocative. In the “Displaying” section, which puts the magnifying glass up to the practices of natural history museums and the ways in which their displays neither truly reflect the natural world, or indeed their own stored collections. I was taken by a piece by Hiroshi Sugimoto. It is a fantastically crisp photograph of a large museum diorama, with all suggestion that it is not a photograph of a real, living habitat having been removed. The casing, glass, and boundaries between the painted background and the 3D objects are imperceptible. It makes one think about the way we see natural history specimens (and indeed “How we see animals” is the tag line for the whole exhibition).

The arrangement and architecture of natural history museums (particularly the one in South Kensington), as well as zoos, get examined in the Displaying and Observing sections, picking apart the politics behind the designs. Finally, the exhibition ends on the eponymous “Making” nature section, which was curated by the Center for Post-Natural History in Pittsburgh.

This section focuses on animals that have been modified by people, through artificial selection and genetic engineering. Richard Pell, the Director of the Center tells an interesting story of how he came to notice that natural history museums collections are not even in their coverage, and how the hand of human interest impacts the natural world, and our relationship with it. Whilst working at a major American museum, he noticed that the rodent collections were heavily biased towards sites where the US had undertaken nuclear testing.

Making Nature was an absolute joy to work on, it allowed me to take a step away from the natural history museum and explore stories that we would not be able to tell ourselves.

Making Nature: How we see animals is on at Wellcome Collection until 21st May 2017.

One thought on “Making Nature; at Wellcome Collection”