There are hundreds of millions of specimens held in natural history collections in museums worldwide, collected over centuries by thousands of experts and enthusiasts. It should come as no surprise, then, to learn that new species are ‘discovered’ in museums on a regular basis. These discoveries generally fall into two categories:

All museums have unidentified and misidentified material in their collections. It is inevitable, given the enormous number of specimens and species that are involved. These are all potential new species, just waiting to be described.

Since I took on the voluntary role of Facebook Editor for NatSCA last year, I’ve read a lot of news stories while searching for content to share on the page, many of them about new species being found in museum collections. And I’ve been more than a little disappointed at the language chosen by the journalists to describe the specimens. The words ‘forgotten’ and ‘overlooked’ crop up frequently in headlines, and stories often describe specimens as having been ‘ignored’, ‘languishing’ in collections, or left ‘sitting in boxes’. This choice of words adds drama to a story for the papers, but it reflects poorly on the museums involved, and the inherent implications of neglect are both unfair and untrue. Having unidentified or wrongly identified specimens in a collection does not imply a failing on the part of the curatorial staff; nobody can be an expert in everything, and to identify one specimen among thousands as belonging to a previously unknown species requires an enormous amount of specialist knowledge and lots of research (often taking years). The important thing is that the specimens are preserved and cared for, so that experts are able to come in and examine them. 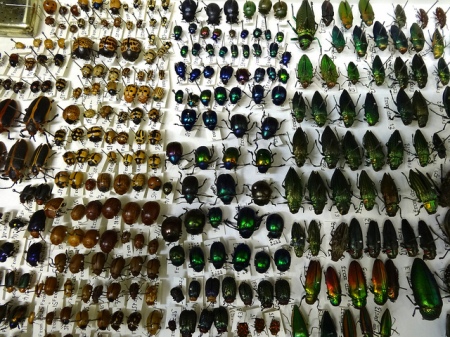 Stewardship is the fundamental responsibility of the curators in charge of their collections. An unidentified specimen has not been forgotten. The average ‘shelf life’ of a specimen belonging to a new species, from discovery to publication, is over 20 years, and can be more than 200 years! This is due to the sheer volume of material that is collected in the field and donated to museums every year, and the expertise needed for identification. As the study of biodiversity (and the loss thereof) becomes more important to conservation efforts, more academics are turning to museums for data on population trends over time. The negative language used in these news articles could harm this relationship, and possibly deter specialists from engaging with museums. And with budget cuts increasingly affecting museum resources, curators want to engage with academics, artists, and other users, now more than ever.

The good news is that this problem is not entirely universal: recent news coverage of the discovery of a new species of ichthyosaur in Doncaster Museum was generally very positive about the value of natural history collections, mainly due to the enthusiasm of the researchers, which came across strongly in their quotes.