There are few museums for me that inspire greater reverence for beauty and the endless variety of nature on display than the London Natural History Museum, the Oxford Museum of Natural History, and Sedgwick Museum of Earth Sciences. These museums all present collections in spectacular, imaginative, and informative ways. However, I was unprepared for the scale, majesty, and awe-inspiring nature of the Naturhistorisches Museum in Vienna, Austria, during my visit this summer. For me, it was evocative of an early ‘Wunderkammer’ filled with curiosities. I walked through what seemed like a T.A.R.D.I.S. of never-ending rooms and corridors filled with objects.

The museum was commissioned by Emperor Franz Josef I and opened in 1889. It faces its equally beautiful sister museum, the Kunsthistorisches Museum, where you can admire the works of Rembrandt, Durer, Rubens, and a frieze painted by Gustav Klimt. The marble, statues, and painted ceilings offer the feeling of a palace. As you enter through the elaborate front doors you are greeted by an immense dome that takes your breath away. Disciplines such as Zoology, Geology, Palaeontology, Botany, and Anthropology are inscribed on the dome’s edge. They allude to its amazing collections and the 19th century desire to understand and bring order to the natural world.

As I ascended the first floor to the Zoology gallery, the rooms or ‘halls’ are connected by long corridors which give you a dizzying view of the connected rooms stretching out in front of you. There are around 39 individual halls. I smiled when I walked into the first gallery called ‘Microcosm’ dedicated to Ernst Haeckel, the German Biologist whose beautiful drawings of radiolarians feature in ‘Kunstformen der Natur’, and inspired my interest in natural history.  The gallery contains models of microscopic radiolarians and water fleas, along with microscopes and a film featuring microscopic life.

The Zoology collections move from protozoans, corals, and molluscs systematically towards vertebrate life and is sympathetically and beautifully displayed, with some of the largest collections of insects and vertebrates I’ve ever seen. There are whole rooms filled with reptiles alone. The bird galleries contain remarkable specimens, and the museum has its very own taxidermy department. The mineral collections are five halls strong, with a Meteorite hall at the end that contains part of the ‘Tissint’ meteorite and an interactive that demonstrates the destruction force of meteorite impacts.

The museum houses over 30 million specimens, with 60 scientific staff working on the collections. Unforgettable specimens on display for me included a complete skeleton of Stellar’s Sea Cow (Hydrodamalis gigas), whose discovery in Alaska by Georges Stellar and rapid extinction is a frequently cited example of the consequences of systematic hunting by humans that was little known to science. I also marvelled at the 25,000 year old Venus of Willendorf figurine, whose palaeolithic origin is said to emphasise female fertility and childbearing. The museum’s palaeontology gallery is equally impressive, with an array of dinosaurs, flying reptiles, and a gigantic fossil turtle.

When I finally reached the top floor, I saw something remarkable. In one long case were about 25 beautifully coloured glass models of marine organisms. They were Blaschkas, and they have fascinated me ever since I saw some of my first at the Grant Museum of Zoology. The models were displayed as part of an exhibition called the ‘Knowledge of Things’ that celebrated the 650 year history of scientific discovery at the University of Vienna. The then director, Carl Claus, commissioned 146 Blaschka models to be made in 1880, and they still remain part of the university’s Zoology collection. 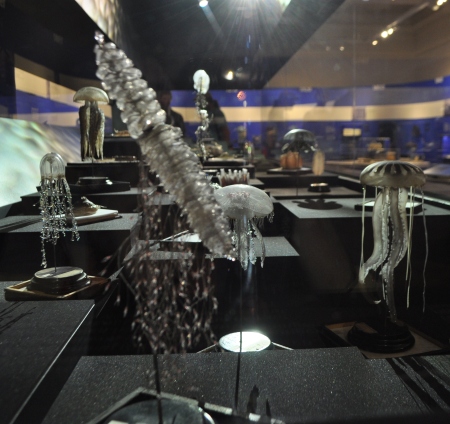 An example of a Siphonophore shown amongst many other Blashka models (Image: Anthony Roach)

They were created by Leopold Blaschka, a glassworker whose skill at producing scientifically accurate models of plants and animals caught the attention of museums and scientific institutes. After the tragic death of his wife, Leopold left for America. Whilst travelling by sea he was fascinated by the marine life he observed. When Leopold eventually returned to Europe, his talents were recognised by Dresden Museum. who commissioned him to produce marine invertebrate models for scientific study. Along with his son Rudolph, he established a saltwater aquarium in Dresden to study their form and assist him in creating accurate representations of these enigmatic sea creatures.

The London Natural History Museum contains around 182 Blaschka models of anemones, nudibranchs, cnidarians, cephalopods, and other stunning marine organisms. The ‘Treasures’ gallery displays some of the best. As Miranda Lowe, Collections Manager responsible for the Blaschka models points out*, ‘‘The range, variety and colour of these invertebrate sea creatures show much more than spirit-preserved specimens, which do not retain vivid colour or form’’. You could argue that these beautiful glass objects are the museum equivalent of the Christmas tree bauble. After all, they are aesthetically, culturally, and symbolically valuable to us in much the same way.