I’m one of the many field biologists whose fieldwork has been cancelled due to the coronavirus lockdown. It’s a tiny price to pay to get this unprecedented global pandemic under control but it’s hard not to dream about the tropical adventures that could have been. Fortunately for natural history curators, re-living the fieldwork of our predecessors while exploring (from home) the collections we look after, can go some way to satiate the travel bug.

The Socotra Archipelago (also spelt Soqotra or Sokotra) probably doesn’t feature in many people’s lockdown travel dreams. The archipelago is politically part of Yemen, a country tragically suffering the world’s worst humanitarian crisis as the result of ongoing civil war. However, in 1898, Socotra was firmly on the bucket list of Henry Ogg Forbes, Director and ornithologist at the Liverpool Museums (now World Museum, National Museums Liverpool).

The archipelago of four islands and two rocky outcrops had been under British “protection” since the 1860s, but had largely escaped colonial exploitation due to harbourless shores and limited fertile land. Nonetheless, Socotra was a well-known landmark for sailors navigating the Maritime Silk Road and Forbes would have sailed past on his way to Southeast Asia (also the destination of my cancelled trip) where he had spent six years in the field.

A British Association committee reported in 1880 that “in every branch of science considerable results are yet to be obtained by further investigations in Sokotra”. Several European expeditions followed over the next two decades and in 1898 Forbes won funding for a conjoint expedition by the British and Liverpool Museums, focussed primarily on zoological collecting. Forbes, accompanied by W. R. Ogilvie-Grant, of the Bird Room at the British Museum (Natural History) (now the Natural History Museum), and J. W. Cutmore, the Liverpool Museum taxidermist, arrived at Aden, on the southern tip on the Arabian Peninsula, in mid-November.

Accounts of the expedition can be found in volumes 2, 3, and a special volume, “The Natural History of Sokotra and Abd-al-Kuri”, of the Bulletin of the Liverpool Museums. Forbes provides a vivid and personal “narrative of the Journey” in the special issue and the species checklists, particularly the birds and mammals written by Forbes and Ogilvie-Grant, feature engaging anecdotes allowing us to travel (virtually) alongside the expedition party. A rundown of what to expect on the journey follows below.

The British and Liverpool Museums Expedition to Socotra

When fieldworking overseas the first thing to do on arrival is clarify the agreed permits and approvals with local authorities and landowners. Arriving in Aden, Forbes heard of political troubles between the colonial Government of India and the Sultan of Socotra. As a result, the British Political Resident was initially unable to provide a recommendation letter which would be vital for a friendly reception on Socotra. A few days passed while a political agreement was reached before the party, now numbering eleven, with the addition of interpreters, cooks, gun carriers and personal guards, departed for the archipelago on December 1st.

The first stop was Abd al Kuri where collections were made around Jebel Saleh (explore this island yourself through photos here). Two species thought to be new to Western science were collected – the endemic and Vulnerable, Abd al Kuri Sparrow, and a wintering, White Wagtail. These specimens are types now held at the Natural History Museum.

The party sailed on to Socotra and after an aborted landing on the west coast anchored near Hadibu (also spelt Hadiboh) on December 7th. After presenting gifts and letters to the Sultan, the party camped on the Hadibu Plain for 11 nights. Birds collected on the plain included the Near Threatened – Socotra Bunting (a new species described by Ogilvie-Grant and Forbes) and Socotra Cisticola.

Twenty-two camels were prepared for the onward journey into the mountains. While bivouacking at the Addah Pass, the party were “soothed to sleep by the ‘song of the setting sun’” (hear the soothing Socotra Scops Owl call for yourself here).

The tranquility wouldn’t last long. The very next day, signs of mosquito-borne fever appeared in the party (something all too familiar from my own encounter with Dengue). Ultimately the entire party became sick with Malaria and gingerly moved higher into the Haghier Mountains (also spelt Haijir) for the relief of cooler temperatures and the sea breeze. The view itself also provided a tonic. Forbes wrote: “the beauty of the view presented by the Haghier slopes and summits, it would be difficult to exaggerate”. (Agree? see it for yourself here). Cutmore suffered particularly badly, and it wasn’t until January 16th that the party moved on to Homhil, the eastern most stop of the expedition. 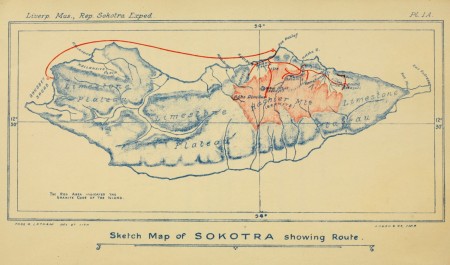 The journey continues in part two…later this week.