The Challenger voyage and the project

Professor William Benjamin Carpenter and Charles Wyville Thomson came up with the idea of exploring life deep in the ocean. The HMS Challenger expedition (1872 – 1876) was the first around-the-world expedition to discover life, the chemistry, and the physics of the deep sea.

A lot of you NatSCA readers will have heard about the HMS Challenger Project run by Holly Morgenroth, the natural history curator of the Royal Albert Memorial Museum (RAMM) in Exeter. I am Heather, her trainee. I am helping to communicate with and visit museums around the UK and further afield to discover where the thousands of zoological, botanical, geological, and ethnographic specimens have got to, as well as any other bits and bobs related to the expedition, such as scientific equipment, documents and photographs.

What happened on the HMS Challenger?

The HMS Challenger set off from Portsmouth on 21st December 1872 and visited about 360 stations, going around all the oceans except the Arctic. At each station, there were trawls or dredges to collect specimens and bottom deposits. Temperature, depth, and specific gravities were all recorded, as well as the composition of the water at many stations.

Throughout the voyage, collections of material dredged or trawled from the ship were sent to William Turner of the University of Edinburgh, who examined their condition and looked after them until the ship returned in May 1876. Although the voyage focused on deep sea collections, the naturalists on board also collected specimens on land – birds, insects, mammals, and plants. They met the inhabitants of the many islands that they visited, some of whom gave the crew members souvenirs, and sold or gave them specimens that they had found on the island.

Jar containing starfish in from station 145 (at RAMM)

So what happened to the collected material?

Once the voyage returned, specimens were sent to numerous scientists specialising in certain areas of natural history. Once sorted through, all of the type specimens were supposed to be sent to the Natural History Museum, then the British Museum (Natural History), and the duplicates were supposed to be returned to Wyville Thomson at the Challenger office in Edinburgh. Sadly, Thomson died in 1882, before a lot of the reports were published. John Murray took over and, from what I have gathered, some duplicate sets that were returned were then distributed to people and museums who took an interest, and some of the scientists studying the material just kept it themselves. In 1918, a few years after Murray’s death, a person called R. Dykes sold off the material that remained at the Challenger office in Edinburgh. 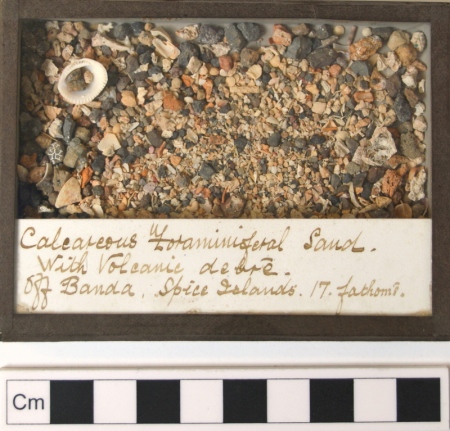 Where is the Challenger material and what is happening at RAMM?

It is everywhere – from Exeter to Dundee, to Ireland, the US and Australia! We are building an online database, onto which we will put as much Challenger material as we can find. This is for researchers, who can find out where they need to go to look at certain material, and for members of the public with a general interest in the voyage. The Challenger expedition was a hugely important voyage in science, discovering thousands of new species. It is important to bring all the material back together!