John Scouler was a naturalist whose contribution to his field was highly respected, despite few publications. He was a collector, a lecturer, and in his working life was Professor of Mineralogy at the Andersonian University (and curator of the Museum) in Glasgow (1829 – 1834), and later at the Royal Dublin Society (1834 – 1854). John Scouler was held in high regard by his peers, yet his story, like many other naturalists during the 19th century, is relatively unknown outside of the world-renowned voyages made by Charles Darwin, Joseph Banks, and Alfred Russell Wallace. 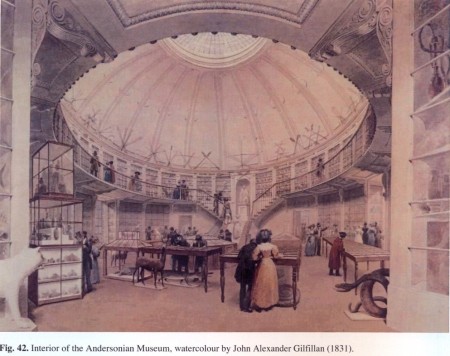 The Andersonian Museum, which was curated by Scouler (by John Alexander Gilfillan, 1831)

The publication begins with the discovery of some ‘dusty plant specimens, dried and mounted on dustier sheets of paper’ found in the biological department of the Royal Technical College, Glasgow. Professor Blodwen Lloyd Binns is charged with the challenge of resolving the mystery of this forgotten herbarium. The Prologue and Introduction are in fact written in her own words, from a draft of a book entitled ‘Round the World in a herbarium’ that she had started in the 1960s. Binns then assesses Scouler based on his contribution to ‘his science’, the scientific thought of the day, and his collections -significantly his herbarium. The author of the journal, Charles Nelson, uses these three areas to portray an accurate and systematic account of Scouler’s legacy with prose that is engaging, erudite, and succeeds in fleshing out the uncertainty around Scouler’s second voyage to India.

Scouler held a strong passion for collecting and an interest in botany. He studied anatomy at Edinburgh University and wished to pursue a career as a surgeon, but had been greatly influenced by Professor William Jackson Hooker, who became his lifelong friend and teacher. It was Hooker (who would later become Director of Kew) who recommended Scouler as ship’s surgeon on his first ‘voyage of discovery’ on the William and Ann to the Galapagos and North West Pacific coast (1824 – 1826), along with another of Hooker’s capable botanists, David Douglas. 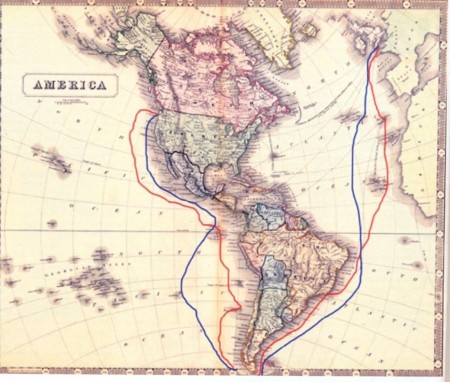 Scouler was the first botanist to explore Oregon and bring back specimens hitherto unknown to science. Scouler reached Canada in June 1825, making new discoveries and descriptions of plants. In Hooker’s ‘Flora’ he honours a new plant collected by Scouler – Phyllospadix scouleri or Scouler’s surf-grass – which belongs to a new genus entirely. This marine flowering plant, unique to the coast, was found at Observatory Inlet, where over 30 species of plants including Scouleri aquatica were found and ascribed to Scouler by Hooker. Scouler’s specimens contributed greatly to Hooker’s great botanical work ‘Flora boreali-americana’ and in some cases still survive in Kew’s collections today.

In conclusion, the journal beautifully articulates the life of Scouler using diaries, journals, illustrations from monographs, images, shipping logs, and his own surviving specimens, along with secondary sources such as museum catalogues. It is clear, accessible and enjoyable to read, and is comprehensively referenced. I also like the addition of coloured plates of the species discovered by and named in Scouler’s honour. Charles Nelson succeeds in accurately assessing Scouler’s legacy against the criteria set out by Professor Binns, and extends our knowledge of Scouler’s later life. It tells me that John Scouler was indeed a man dedicated to ‘his science’, without a desire for self-promotion or critical acclaim.