Anyone who has to deal with fluid collections, without the support of a natural history conservator, probably has nightmares about cracked jar lids and desiccated specimens. But would you sleep more easily if I told you that it’s possible to get a transformation like this using a straightforward and inexpensive method?

Here’s my account of how I resurrected this dehydrated specimen using stuff you probably have sitting in your museum cupboards or that you can buy for less than £20. It’s worth noting that the technique will not always work and if you plan to use it on a specimen that may have useful DNA to contribute, you should take a sample before rehydrating, since it is likely to reduce the quantity and quality of DNA you can extract.

The technique is based on the one reported by Randal Singer in 2014 in Collections Forum 28:1-2 pp.16-20 and it basically uses water vapour as a rehydrating agent and Thymol as a fungicide to deal with mould growth. Of course, I deviated a little from the method, since I had to make the work fit in around a multitude of other tasks. As you can see however, the technique is quite forgiving as long as you keep in mind which elements can be dragged out and which can’t.

What sounds like it should be the easiest part of the process was actually one of the hardest. Dehydrated specimens can become very stiff and brittle, so they can’t deform on the way out of the jar in the same way that they did when they went in. This leaves you with a choice of either breaking the specimen or breaking the jar.

I opted to sacrifice the jar, since it was a relatively new one with no interesting history associated. I did this carefully using a geological hammer and chisel. I lay the jar on its side and firmly tapped at the outer rim, working away from the specimen that I had pushed to the bottom of the jar with a nitrile glove on top to form a simple barrier. It should go without saying that I wore gloves and goggles for this.

The jar broke as intended and the frog emerged unscathed. I’m sure there are more refined ways of getting into a jar, but this worked for me.

The broken glass fragments went into a glass sharps bin and I added some water and Industrial Methylated Spirit (IMS) to the bottom of the jar to help dissolve the nasty mouldy gunk and free any labels trapped in there.

Perhaps ‘rehydration chamber’ is a more accurate name, but it sounds less dramatic. All it actually requires is a large jar with a tightly fitting lid. Inside you’ll also need a platform made of a material that is waterproof and ventilated. I cut up a folding test tube holder using a sharp blade, making an effort to smooth the cut edges.

This platform just needs to be high enough to hold the specimen above the water level in the jar. The water should be deionised and a couple of Thymol crystals should be dissolved in it to inhibit mould growth in the humid environment you will be creating. As a bonus, it will also kill any mould that may have become established on the specimen.

Humidity is our friend in this process, so I put the jar on one of our antique radiators and let the water warm up a bit. Then I popped the frog on the platform, put on the lid and apart from a few visual checks, I pretty much left it alone for a little over a week (nine days if you want details).

In that time the frog softened and swelled a bit, the mould growing on its hind legs disappeared and the water started going brown.

Once the specimen was starting to rehydrate through water vapour humidification, I transferred it to some fresh deionised water in another jar. I used an offcut from the plastic test-tube holder to keep the specimen submerged.

If you’re trying this method, please make sure you dispose of the used rehydration chamber water appropriately – Thymol is toxic to aquatic life and needs careful handling.

Water is great for hydration, but it’s not good for preservation. That means you can’t leave the specimen in just water for too long or you’ll get bacterial growth that causes damage. I let this one sit for about 6 hours before adding a small amount of Industrial Methylate Spirit (IMS) to the water, to start the stepping-up process and restrict bacterial growth.

Normally stepping-up requires careful measurement of volumes of water and IMS to gradually increase the concentration of alcohol until it’s strong enough to preserve the specimen, but without causing a large jump in concentration that can cause damage to cells from osmosis happening too fast. However, I managed to do away with the fiddly measuring stage, by using an alcohol refractometer that I bought online for about £12. If you have to work with fluid specimens I strongly recommend getting one of these – it only needs a few drops of fluid to get a reading and once calibrated it’s pretty accurate up to a strength of 80% – a real timesaver when it comes to topping up. 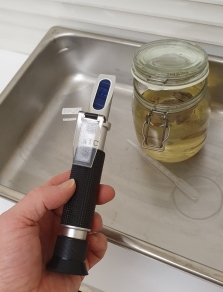 This handy device allowed me to keep track of the increasing strength of the fluid as I added small volumes of IMS over the course of a week, gradually approaching the desired strength of 70%. Once the specimen had acclimated to an alcohol mix at the desired strength, I transferred it into a fresh batch of IMS at the same strength and safely disposed of the discoloured fluid that it had been stepped-up in.

So here it is, the end result of this simple, but remarkably effective process: 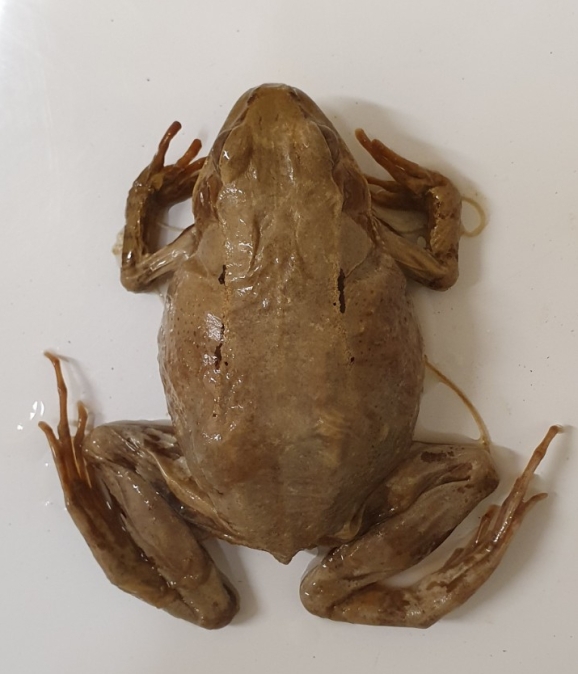 You can probably see that there is some slight damage to the skin and muscle tissue at the top of the hind legs. This is due to the mould that was growing on the specimen when it dried out, where the fungal hyphae have broken down the tissues using enzymes.

But apart from that small area of damage, I was surprised at how effectively the rehydration worked to bring this specimen back to life. Even the eyes were left looking remarkably well inflated. 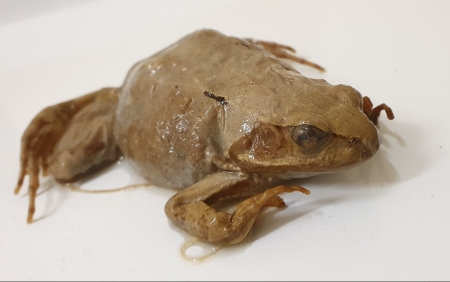 I heartily recommend giving this technique a go if you have dehydrated specimens that you’re thinking of giving up as a lost cause.