‘To explain grace requires a curious hand’ wrote Marianne Moore, in her 1938 poem, The Pangolin. Moore first learned about pangolins at college in biology class and remained fascinated by them for the rest of her life. Curiosity was what first drew me to pangolins, too. Not just about their curious, clawed hands – when I first encountered a stuffed pangolin at the Great North Museum, its whole appearance was like nothing I’d ever seen. A small quadruped, clad in precisely overlapping rows of jagged scales, like steel plating welded onto a badger. A huge tail at one end, a tapering snout at the other. It was an animal that suggested a host of comparisons – a pinecone, an artichoke, a dinosaur. What on earth was it? I decided to investigate.

I soon learned it was a Ground Pangolin (Smutsia temnickii), one of eight species of pangolin that make up the family Manidae. Pangolins are the only scaled mammals and are found in tropical Africa and Asia. Most species live nocturnal, solitary lives. They’re notable for all sorts of reasons. The Ground Pangolin can walk on its back legs, like a tiny T-rex in a suit of armour. The Black-bellied Pangolin has a tail so long it has more bones than any other mammal. 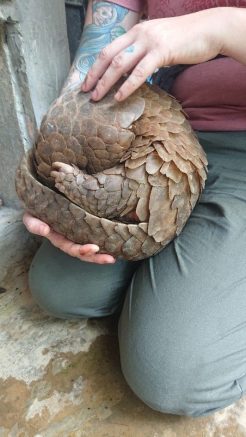 Sunda Pangolin (Manis javanica) at SVW Rescue Centre, Vietnam. When threatened pangolins curl into a defensive ball. This animal was found wedged beneath a seat on a bus travelling from Laos to Hanoi and rescued by SVW staff (© Dan Gordon)

They also have the unenviable distinction of being the world’s most trafficked animal. The scales that make them so striking are used in traditional medicine, and as demand for this has grown in Asia, unsustainable, illegal hunting has decimated pangolin populations. They’re ill equipped to fend off humans. Like a hedgehog, a pangolin will curl into a ball to defend itself – a technique that works well against lions and leopards but makes them easy for people to catch. All eight species range from Vulnerable to Critically Endangered on the IUCN Red List.

Pangolin collections in British and Irish museums are generally small. My own research into this reveals that, of 25 institutions that said they hold pangolin collections, almost all have fewer than 10 specimens and these usually have little or no data. This is especially true in historic houses, where they are sometimes displayed as decorative items. The specimens don’t seem to be used a lot in research.

The Great North Museum holds nine pangolins – skins, mounts and skeletal material. Reflecting the national picture, there’s very little about them in our catalogue. Most seem to have been collected by 19th century travellers as curiosities. A skin from China, bound up with bamboo twine. A skull, missing the mandible, origin unknown. The dusty Ground Pangolin that first caught my eye – donated by a retired doctor from Tanzania. 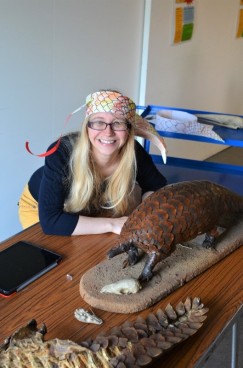 Nevertheless, pangolin specimens get lots of attention from visitors and museum staff almost everywhere. Most institutions with pangolins report having them on permanent display. Many museums also run events using their pangolin collections. At the Great North Museum we’ve used them in our learning programme and to mark World Pangolin Day in February, an annual event that is part of a growing global movement to raise awareness of pangolins and their plight. Museums across the country reported using them in gallery interventions, exhibitions and a host of events. Marianne Moore’s ‘impressive animal…of whom we seldom hear’ is finally getting the attention it deserves.

The value of this work was highlighted to me when I visited one of the most prominent organisations in the global fight to prevent pangolin extinction. Save Vietnam’s Wildlife (SVW) is based in Cúc Phương National Park, Vietnam – a nation that is a global hub for pangolin trafficking, and one of the leaders in the effort to put a stop to it. It was here, while volunteering in 2019, that I got to see pangolin conservation first hand and visit the museum SVW runs as part of its Pangolin Rescue Centre. 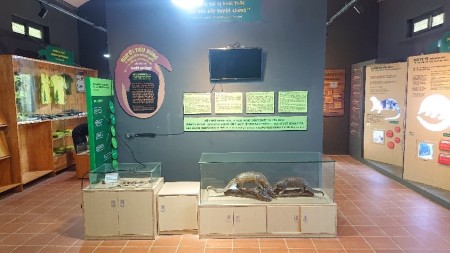 Alongside a pair of stuffed pangolins in the main gallery sit the grim tools of pangolin poaching and a range of interactives aimed at younger visitors. SVW’s programmes for local schools engage with hundreds of children every year.

Talking to SVW staff I was surprised to hear that despite many international partnerships with zoos they didn’t have any relationships with museums. If this is true of other pangolin conservation organisations, it really seems liked a missed opportunity. In large parts of the world, a museum collection is the only way people can get close to a pangolin given how few are found in captivity.

SVW’s rescue centre was also where I finally got to see a living pangolin. One night, I crept silently into the Pangolarium with the other volunteers, clutching a bowl of ant larvae. The only light in the pitch blackness came from the beams of our head torches. Then, as I stood in the doorway of the enclosure, a Sunda Pangolin stepped cautiously into the light. It’s long, glistening snout sniffed the air as it approached. Its scales lay tightly furled against its body as it curved down over the bowl to feed. 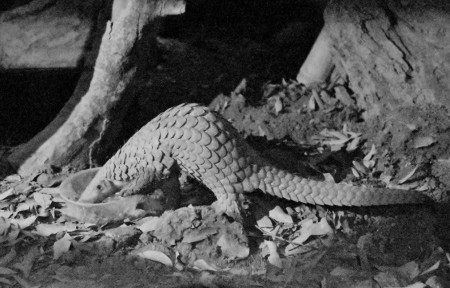 The first pangolin I ever saw – a Sunda Pangolin in the SVW Rescue Centre, Cuc Phuong National Park (© Dan Gordon)

The tongue, a shocking pink in the torchlight, was thin and flat, more like a palette knife than the sticky string I’d imagined. It whipped out with a flick, flick, flick rhythm as the pangolin fed.

It’s eyes were small and dark, it’s ear little more than a wrinkle in front of the tiny, fishlike scales on the head. It moved with a smooth and silent grace, sitting up occasionally to check I hadn’t come any closer. It was a very special moment for me, made bittersweet by the knowledge that this was a critically endangered animal, one I was only able to see because it had been poached.

There is a growing appetite, from museum staff and visitors alike, to make use of pangolin collections, to raise awareness and help in the fight to conserve living pangolin populations. There is scope for us to do much more. Museums have resources and knowledge that could benefit organisations like SVW working at the conservation front-line, and ultimately help the animals I was able to see there.

Marianne Moore, chronicler of pangolins, never saw one in her lifetime, but described them as ‘a thing made graceful by adversities’. Adversities that I’ve seen first-hand. But there are reasons to hope.

The Pangolin by Marianne Moore