This article was first published as a blog for National Museums Liverpool, 16 August 2019.

150 years ago Alfred Russel Wallace wrote about “the land of the orang-utan” and sent specimens to Liverpool.

2019 is the 150th anniversary of the first publication of Alfred Russel Wallace’s The Malay Archipelago: The land of the orang-utan, and the bird of paradise. A narrative of travel, with studies of man and nature.

Although best known as the co-discoverer of the theory of evolution by natural selection alongside Charles Darwin, The Malay Archipelago firmly established Wallace as one of the greatest natural history explorers.

Title page of the first edition of The Malay Archipelago published in 1869, 150 years ago.

The Malay Archipelago is a vivid, first-person account of Wallace’s travels, studies and natural history collecting in Southeast Asia. During 8 years Wallace travelled over 14,000 miles and collected 125,000 specimens. Orangutans feature prominently in the book’s title, and chapter four is largely devoted to Wallace’s adventures with orangutans in Sarawak, Borneo.

Wallace wrote: “… one of my chief objects in coming to stay at Simunjon [a river in Sarawak] was to see the Orang-utan (or great man-like ape of Borneo) in his native haunts, to study his habitats, and obtain good specimens of the different varieties and species of both sexes, and of the adult and young animals. In all these objects I succeeded beyond my expectations, …”

The orangutans of Borneo are now generally considered to be a single species (Pongo pygmaeus), with a single subspecies found in Sarawak. However, Wallace and his contemporaries thought these animals comprised multiple species, including “Simia satyrus” and “Simia morio”.

Chapter four recounts Wallace’s collection of around twenty orangutans, about ten of which he shot himself. Wallace also recalls fostering a female baby orangutan orphaned after her mother was shot out of the canopy. Wallace’s emotional attachment to the “poor little thing” (page 68) provides a dramatic counterpoint to his hard-headed hunting of adults.

Among the orangutans collected by Wallace in Sarawak, he specifically mentions: the first full grown specimen he obtained (a female) (page 64); a “giant” male with a perfectly preserved skeleton (page 76); and the “only other male specimen of Simia morio” (page 87); as being in the “Derby Museum”. World Museum was originally called the Derby Museum in honour of the 13th Earl of Derby whose natural history collection founded the Liverpool public museums.

Of these specimens the Simia morio male and female skulls can still be found in the World Museum collection. The skulls are labelled in pencil “S. morio”.

“Simia morio” male skull collected in Menyille, Sarawak by Alfred Russel Wallace in August 1855. The cranium and mandible are inscribed with “S. morio” and the catalogue number 31. The cranium was likely sectioned into two for the “ascent of man” display. At this point the mandible became separated from the cranium and was accessioned into the collection as a “chimpanzee”. They have now been reunited. © National Museums Liverpool, World Museum

For some fortunate reason the male Simia morio skin, shipped in a casket of arrack, was never mounted as a taxidermy specimen so didn’t go on display in the gallery. It remains folded (now dry) as originally received demonstrating Wallace’s procedure for preservation and packing.

It is likely the other skins and mounted skeletons were prepared for public display and lost in the museum’s Upper Horseshoe Gallery during the blitz of 3 May 1941. The orangutans appear to have been mounted similarly to those collected by Wallace in Sarawak and now in the Natural History Museum, London.

Mammals in the museums’ Upper Horseshoe Gallery before the blitz, including on the left what appears to be a juvenile and adult orangutan.

Wallace’ reputation has fared well in the century since his death: “an adventurer who does not present himself as adventurous; he is a Victorian Englishman abroad with all the self-assurance but without the lordly superiority of the coloniser; he is the chronicler of wonders who refuses to exaggerate…”. However, there is an impetus to recognise the local people who enabled Wallace’s achievements – the Dayak, Malay, ethnic Chinese and other indigenous peoples of Sarawak. Later this year the Lee Kong Chian Natural History Museum in Singapore will unveil a statue of Wallace and Ali, Wallace’s “faithful companion of almost all my journeyings among the islands of the far East”.

As a researcher and lecturer working in Malaysia I attended the 2013 Alfred Russel Wallace- His Predecessors and Successors conference in Kuching, Sarawak. Like Wallace 150 years before, I was eager “to see the Orang-utan (or great man-like ape of Borneo) in his native haunts”. I visited the Semenggoh Nature Reserve, a sanctuary run by the Sarawak State Government for semi wild orangutans which have been injured, orphaned or kept illegally as pets. 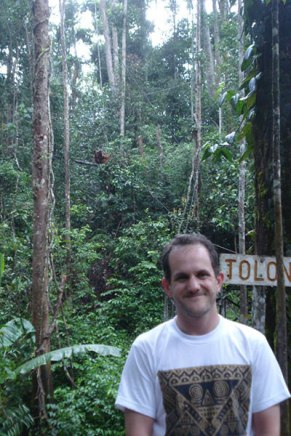 Myself and orangutan at the Semenggoh Nature Reserve, Sarawak in November 2013.

The Malay Archipelago has inspired scientists, naturalists and novelists for 150 years, from Joseph Conrad to David Attenborough. Let’s hope it can help inspire the current generation to do everything they possibly can to ensure the survival of the critically endangered orangutans of Borneo.

I would like to thank the Earl of Cranbrook for kindly providing his research into specimens collected by Wallace, Wan Faridah Wan Jusoh for information on locations in Sarawak, Muhammad Dzaki Safaruan (Lee Kong Chian Natural History Museum) and Barry Clarke for information about the Wallace and Ali Statue and Amanda Naaum for photos from Semanggoh Nature Reserve.

One thought on “The Land of the Oran-utan”