Through August to October this year, NatSCA ran its very first competition. Running up to the Caring for Natural Science Collections one-day conference at Oxford University Museum of Natural History (on 17th October 2018), the competition asked participants to post natural history conservation themed photographs to Twitter with the hashtags #NatSCAConservation and #photocomp.

Whilst it took a little while to warm up, buoyed by some fantastic images posted by the NatSCA conservation working group, we received some excellent entries, resulting in a close competition for first place.

The entries ranged from geology to taxidermy, from the humorous to the technical. This was the exact response we were looking for, illustrating the variety and accessibility of conservation.

When it came down to it, the winning photograph was an excellent composition, highlighting the complexities of conserving an unusual object.

The winner is this fantastic entry from Anastasia van Gaver, which features Anastasia and her colleague Samuel Suarez Ferreira on their first day at work at the Museum of Zoology, University of Cambridge, (@ZoologyMuseum), image taken by Natalie Jones. Talk about being thrown in at the deep end with this monster of a giant spider crab. Both Anastasia and Sam attended the conference in October and gave talks on specific conservation experiences during their contracts at the Museum of Zoology. To be able to spotlight emerging professionals working with natural history collections was one of the main achievements of the conference and competition.

Anastasia says; “The Cambridge University Museum of Zoology reopened in June, following a major HLF funded redevelopment. I was lucky to be one of the conservators to join the team for this project and this picture was taken on my very first day at the Museum, in August 2017. Having just visited the stores and the lab, my new colleague Samuel Suarrez Ferreira and I got given the task of making this Japanese spider crab fit for display! I submitted this picture for the competition not only because of the great memories I have of the best possible first day a natural sciences conservator could ask for, but also because it is a good example of team work: Sam and I decided on treatment together, then each conserved one side of ‘Krabby’, before the mountmaker Rebecca Ash designed an intricate bespoke metal support for it.”

The competition was judged by the NatSCA committee and the conservation working group. The judges commented that the winning photograph was eye-catching and well-composed, and featured complex conservation in action. They were also pleased to see an invertebrate in the spotlight:

“It’s a very dynamic image and sometimes you need two conservators to do a job and really good to see that they have two conservators!” One of the anonymous judge’s comments.

We also want to give an honorable mention to second and third places, as competition was tight at the top and our judges also applauded these entries.

In second place came Max Riley, volunteer at the Cole Museum of Zoology (@ColeMuseum), with this well secured platypus mount being packed for freezing as part of the museum mass migration project. 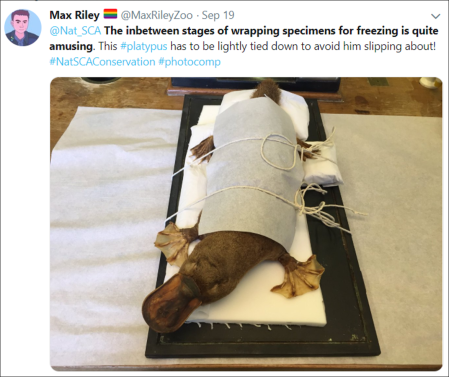 In second place was this platypus courtesy of Max Riley. © Cole Museum of Zoology.

And in third place came the Grant Museum of Zoology at University College London (@GrantMuseum) with this conservation in action shot at the Whale Weekender event; winner of the Project on a Limited Budget at the Museums and Heritage Awards 2018. 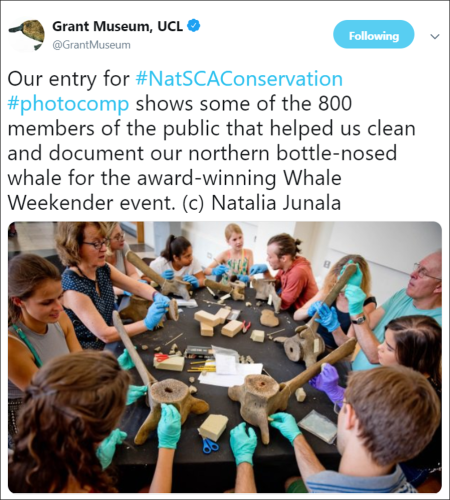 The Grant Museum of Zoology came in third with an image from Natalia. © Natalia Junala.

All in all, a big win for university museums!

The photo competition was inspired by similar competitions ran by Icon (the Institute of Conservation) groups, in particular the Heritage Science group which this year was won by our own Nigel Larkin with his photograph using infrared thermal imaging.