With less than one year to go before Britain officially leaves the European Union, it’s high time we got to grips with what Brexit means for those of us working with museum collections. The most talked-about issues have tended to be the impact on visitor numbers, hits to funding and the loss of skilled and knowledgeable staff, as museum professionals reconsider staying in a more divided (and some might even say openly xenophobic) Britain.

However, there are also practical issues that need to be considered right now, as the UK government wrangles over the deal for borders and trade relationships that will impact on how museums undertake their day-to-day business. In particular there are significant issues relating to how membership of the Customs Union plays out.

This became a reality for me when I  was assessing the status of research loans to the UK from the National Museum of Ireland, where I am the Curator of Zoology & Entomology. I have to deal with quite a lot of research loans of type specimens to taxonomists and getting material across borders can be quite nerve-wracking thanks to the attitude of the occasional overzealous border official – who can forget the horrific incident last year in which 105 botanical specimens (including six types) were incinerated by Australian border control?

Our research loan agreement allows researchers to borrow specimens for the duration of one year and it dawned on me that any loans sent to the UK after 29th March this year may be returning from a non-EU country next year, with different regulations in place for export than those that are currently in place (depending on how the withdrawal from the EU and the Customs Union is phased – which is still not known). With Brexit and a new border status between Europe and the UK (or Britain, depending on how the situation with Northern Ireland is resolved) there are likely to be changes in the paperwork needed to send specimens, and with that there will undoubtedly be a period of confusion for border officials* having to deal with significant changes in import/export requirements between the UK and Europe, and the rest of the world. 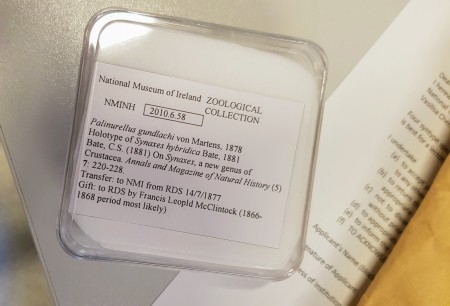 A National Museum of Ireland lobster holotype I recently collected after it was loaned to the NHM, London. UK border officials at Gatwick got twitchy about it, but the paperwork checked out and they let it through security – after a stress-inducing delay of course.

As well as local legislation dealing with imports of animal and plant material from a trade and biosecurity perspective, one significant area of change if the UK leaves the Customs Union will be in relation to CITES, which would require a tightening up of the documentation required for moving listed taxa across European borders. The UK would also need to revisit the management of CITES for moving specimens to the rest of the world, since the current systems are based on EU legislation, despite being enforced and managed locally by the UK. As anyone who has to deal with CITES for loans will know, it’s already complicated and clear official guidance is hard to find.

With all of this in mind, I will be recalling all UK loans prior to March 2019 and although I plan to continue loaning to the UK up until September, any new loans issued will be for six months rather than a year. I hope the issue of the Customs Union and borders is resolved quickly and with clear guidance, so that loans can resume as quickly as possible once the borders issue has been resolved.

Moving on from the perennially tricky issue of loans, there is the more straightforward, but no less important issue of supplies. Britain is not a huge market in relation to the whole of Europe or America and most of the conservation grade materials we use aren’t made here (and even if they are, their precursor ingredients are not). Everything from archival standard pens to insect trays and Industrial Methylated Spirit are shipped in from overseas. Undoubtedly these materials will still be available, but if the UK leaves the Customs Union we can expect to see the cost of purchase increasing in the short term (thanks to duties being imposed) and quite possibly in the medium and long term, depending on the speed and ability with which new trade deals can be struck. Even without duties there are likely to be price hikes due to the reduced purchasing power of the weakened pound and we may see some specialist suppliers in the UK pushed out of business if they rely on significant sales to Europe. 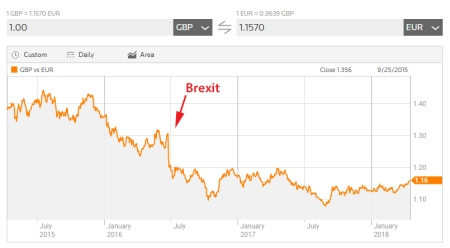 British Pound against the Euro before and after Brexit. Data from Reuters.

For many smaller museums the cost of materials is already something of a barrier to good collections management practice, so any significant increase in the cost of materials is likely to further limit collections work. All of this is of course set against a sustained background of reduced funding in the sector and – as the Mendoza Review [link opens full pdf] pointed out – it’s unlikely there will be improvement in that area any time soon.

Of course, Brexit may bring benefits as yet unspoken and unforeseen. Perhaps the UK government will decide to invest more in cultural attractions, as the weakened pound turns Britain into a more attractive holiday destination for overseas tourists (it’s not as if they visit for the climate). There may also be an upsurge in people “staycationing” in the UK, as overseas travel becomes more complex (potentially, depending on the final travel agreements) and overseas holidays become more expensive with the post-Brexit slump in the pound.

Regardless, UK museums have had to learn to be resilient – after all, “resilience” has been the sector buzzword for the last few years and there’s been no mercy for those organisations that haven’t achieved it. There will be ways to address some of these issues; perhaps by stockpiling commonly used supplies over the coming year, pooling orders for materials between organisations for economies of scale, and perhaps finding cheaper alternative (but still suitable) materials. Whatever happens, it seems that once again it will probably be a case of museums having to do a little bit more with a little bit less, but the result of yesterday’s House of Lords vote does offer a glimmer of hope that the UK may remain in the Customs Union and avoid some of these potential issues.

*There are few things quite as worrying for a museum professional dealing with a loan than confused border official – they can be more destructive than an Anthrenus infestation, as we discovered from the Australian debacle last year.

Written by Paolo Viscardi, Curator of Zoology & Entomology at the National Museum of Ireland, and NatSCA Chair