We don’t usually cover “national *insert_animal* day” specially on this blog, but this year we’re particularly excited about gorillas because a book was recently published that contains a comprehensive list of all the gorillas held in natural science collections worldwide.

This impressive resource has been compiled by John Cooper and Gordon Hull over the course of many years and not only are specimens listed, their collection and/or acquisition data are also reported. Cooper and Hull have also offered suggestions for use of specimens in collections as well as guidance on the different types of preservation available and how they can be achieved. This only forms part of the book, with the first section more concerned with the health and conservation of these impressive animals.

Many museums have Gorilla specimens on display and it’s fairly common to see older skeletal specimens mounted upright alongside Chimpanzees, Orangutans and Humans. This arrangement provides a convenient way in which to compare the anatomy, providing a very clear and intuitive sense of the similarities and differences between the great apes, showing the clear relationship between them.

I always find it interesting to see just how upright the apes tend to be mounted in older collections. In some instances it may have been due to case width restrictions (a lot of specimens tended to be mounted in improbable poses so they looked bigger or would better fit into tight spaces), then there would be the tendency towards anthropomorphisation to make the specimens easier to relate to, but mainly there was a remarkably poor understanding of the posture of the animals in real life.

Illustration from ‘Wild life under the equator. Narrated for young people’ by Paul Chaillu (1896). N.B. this is NOT how Gorillas usually stand.

You can see this clearly in illustrations from the 19th Century, where you seldom see more than a bit of a slouch depicted and it’s really brought home by the models made for the 1933 film King Kong just how poorly the posture of Gorillas was understood. 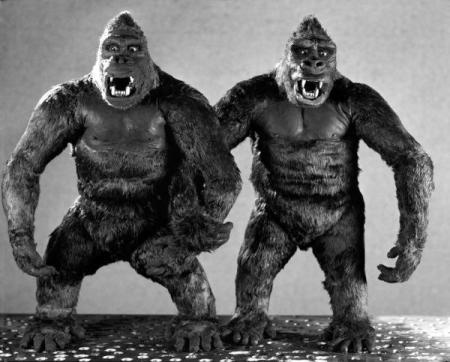 This was rectified in the Peter Jackson King Kong remake, but sadly it appears that the recent Kong: Skull Island has the gargantuan Gorilla back in an inaccurate upright stance, despite the fact that today we’re much more familiar with the knuckle-walking of Gorillas. Now their normal gait is well recognised to be quadrupedal, as reflected by Police Officer Tom Harrison, who recently spent six days doing the London Marathon in a Gorilla suit on all fours to raise money for the Gorilla Organisation.

Conversely, Ambam the Gorilla at Port Lympne Wild Animal Park in Kent seems to be unaware of this as he regularly walks bipedally (although this tends to be when carrying food):

This discussion about posture is interesting from a biomechanical perspective, but it also relates back to one of the distinctions between us and other apes that has polarised the perception of how evolution works, feeding into the concepts of progress and advancement rather than fitness for an environment:

When you look at the history of science and historical approaches to explaining the place of the Gorilla within our understanding of our own species, you can uncover some interesting – and sometimes shocking – revelations.

In some collections Gorillas were acquired as Physical Anthropology objects – providing an example of what was once considered our closest ancestor. Dig into other specimens acquired with the same topic in mind and you find Orangutans, Chimpanzees and of course Humans of a variety of ethnic groups or, as they were referred to at the time, ‘races’, who would often be interpreted with reference to the Gorilla as an example of more ‘primitive’ types – with white Europeans being seen as ‘superior’. Even Darwin bought into this:

At some future period, not very distant as measured by centuries, the civilised races of man will almost certainly exterminate, and replace, the savage races throughout the world. At the same time the anthropomorphous apes, as Professor Schaaffhausen has remarked, will no doubt be exterminated. The break between man and his nearest allies will then be wider, for it will intervene between man in a more civilised state, as we may hope, even than the Caucasian, and some ape as low as a baboon, instead of as now between the negro or Australian and the gorilla.

This sort of scientific racism was widespread and accepted as a convenient justification by the Imperial establishment of the time for treating others inhumanely, since they were seen as not quite human. This ethnocentrism (and sociocentrism, since class factored into the equation too) provided the intellectual grounding that directly influenced the zeitgeist of the early 20th Century, from the writings of Edgar Rice Burroughs (the author of Tarzan) to the atrocities carried out by Hitler and his Nazis.

Science may have moved on, but sadly the legacy of racism that it helped embed in society hasn’t. Subhadra Das and Miranda Lowe asked ‘how can diverse audiences trust museums if we don’t acknowledge the uncomfortable origins of many of our specimens?‘ in their talk “Nature read in black and white or How to stop being racist and develop worthwhile natural history curation” at this year’s NatSCA conference, which I am looking forward to seeing published in the Journal of Natural Science Collections at the end of this year. This question is a powerful one and for many specimens we make assumptions about how and why they ended up in our collections, but looking for the skeletons in our collective closet is something that as professionals we should do.

Unfortunately, the representation of BAME (Black Asian and Minority Ethnic) people in the museum workforce is poor, and since museum professionals tend to shy away from engaging with topics they don’t feel qualified to talk about (particularly something as personally powerful as ethnic identity or as unpleasant as racism), many of the stories of how our collections were acquired and interpreted in the past have been ignored or swept under the carpet. But where we find embarrassing histories, we need to delve into them, no matter how unpalatable they might be, because within those histories may lie human stories that would otherwise remain overlooked and unacknowledged.

This was raised at the NatSCA conference this year and help is at hand:

There is a group in the sector who can provide information and support for addressing issues of race in museums: @MuseumDetox #NatSCA2017

So now there is no excuse for keeping the stories of BAME contributors to collections locked away, and harmful historical narratives can be laid bare, to make it clear just how hollow the past pseudoscientific justifications for subjugation and exploitation really were. As Subhadra and Miranda pointed out, perhaps with some honest discourse, we can gain the trust of more diverse audiences?