This post is the first in our series of presentation write-ups from the 2015 NatSCA Conference, Museums Unleashed!

I was asked to deliver a natural history version of my social media challenge for NatSCA’s 2015 Museums Unleashed conference. The idea of the challenge, which I’ve run in the past with students and museum professionals who might be afraid of using social media, is to informally discuss how to respond, if at all, to difficult questions that might come in on social media.

Before the conference, I asked NatSCA members to suggest any real world examples of difficult comments and queries that any of them may have received through blogs, Twitter or other social media platforms that were challenging to respond to. Any museum professional worth their salt who has worked in the public galleries can very confidently deal with those tricky questions, ranging from “Did you kill all these animals?” through to “If we evolved from monkeys, why do men and women have a different number of ribs?”. However, with social media it’s different because those responses are ‘published’, and often the platform might not be best suited to dealing with complexity.

There are also considerations depending on guidelines or policies that your institution has in place; some museums seem to have a policy of broadcasting but not engaging, and others will have topics they just don’t engage in. Are you responding as the institution or is it clear that it’s your opinion? Do you have absolute freedom to say what you want on personal social media accounts, even though you may be using them on ‘work’ time (the answer is often no)?

“This museum is disgusting!” Mark lays out the challenge (Image: Grant Museum of Zoology, UCl (@GrantMuseum) via Twitter)

The idea of the workshop was to work in teams to decide how to respond to some tricky social media situations sent in by natural history museum professionals from across the UK, and hopefully as a group show that it’s not always scary. Also, importantly, that you may not always wish to engage, but by using social media cleverly you can engage with your virtual audiences.

First up, though, were the team names. This session was the last formal session of a jam-packed conference, and it showed with the names that the UK’s best and brightest museum professionals came up with: #newbies, Team Celtic and Then Some, Is it Dead? Poke it, Social Six, Team Large, Come Back Right At You, The Con Artists, and the appropriately named Team Conference Fatigue. Exactly the mix of humour that works with social media. 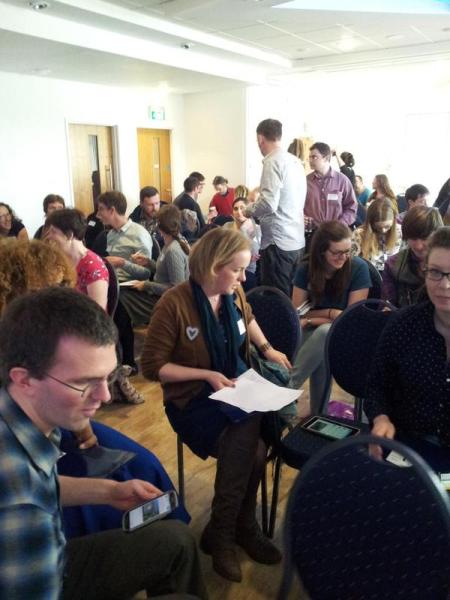 There were five questions the teams drafted responses to:

On first reflection, these questions might set you squirming. Do you engage if it’s tough to respond in 140 characters? If you don’t engage, will it look like the museum is trying to hide something? The NatSCA members rose to the social media challenge, however, and came up with a range of serious, bold, funny, and thoughtful responses. I won’t got through all the ‘answers’ here, suffice to say the merits of crab sex research were defended, there was open discussion about museum ethics (which we rarely display in exhibitions), and a number of very honest responses perhaps spurred on by conference fever.

A selection of responses, both serious and silly (Image: Mark Carnall)

Overall most teams decided to engage rather than ignore any of these difficult responses. One top tip was to make sure you take a step back, as sometimes a hasty or heated response could create a social media storm. Some of these comments could be prompters for policy statements, blog posts, or even exhibitions, that address head-on some of the meatier issues that we may have been reticent to engage with in the past. Some of these could result in genuine engagement, as we saw with a real example of an insect sex tweet from the Natural History Museum, London, and some are an opportunity to show the more human side of the staff that work in, and make, museums.

The workshop got a lot of positive feedback, and hopefully rounded off the two day showcase of how social media can help rather than hinder all areas of museum work, and that engaging with the social side (the hint is in the name) is something to be embraced and not feared.